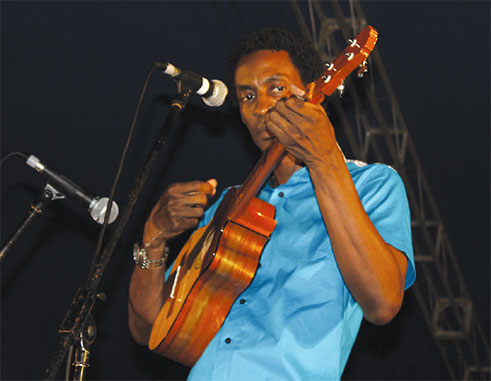 THE National Schools Music Festival, which took place at the National Cultural Centre last Thursday, is getting huge praise from one of its organizers, Jason “Bachelor” Joseph.

Fourteen secondary and primary schools took part in the event and, according to Joseph, although he admitted being uneasy in singling out schools, “we cannot run away from the fact that there were outstanding performances”.

Topping the list of those performances was SDA Academy, with the two-time calypso monarch commenting that: “SDA started the festival on a very high note.”

Highlighting the overall excellence of the performance, Joseph said that: “It was really a class act from SDA Academy. I think the entire performance was excellent. The quality of their harmonies and their singing and the musicians in the background added to that performance…That’s the sort of level we want everybody to reach.”

Also given high praise by Joseph was St. Joseph’s Convent’s Choir and its a cappella ensemble. Despite saying that a cappella is usually more challenging, Joseph was impressed with the way the Convent singers “were able to maintain their harmonies, the crispness of the voices and how nicely they blended, the difference in dynamics, soft, loud, solo singing (as) compared to group.” He added saying that the piece performed by the choir “was a very nice arrangement.” The choir from Forestiere Primary was also mentioned as having given a good performance.

The solo singers, in general, were given high praise by Joseph, who said that the number of good solo acts were too numerous to mention. He did, however, single out Babonneau as well as Beanefield Secondary and Bocage Secondary, saying that they were “pretty good”, adding that SDA Academy and Castries Comprehensive have “a lot of talented musicians”.

When asked if the switch from a choir competition to a music festival had lowered the quality of performances on display, Joseph said it did not. He pointed out that the competition format tended to bring out a lot more effort on the presentation front, saying: “The only thing I think that the competition would have added (is that) the schools tend to put in a little more oomph when it comes to presentation (and) maybe costuming. That is the little edge that the competition gave. People always go a step further just to impress judges and so on.”

A few exceptions did wear costumes on the day of the festival, as pointed out by Mr. Joseph, who said, “we did see that (costumes). There were a couple of schools: St. Aloysius RC Boys and a couple of the soloists who were well-dressed.”

The musician said organizers as well as some teachers wanted to be rid of the competitive aspect of the choir competition, leading to even becoming a music festival.

“We had a case where a couple of teachers, in particular, felt that some schools were always at a disadvantage when it came to the choir competition. (Some teachers felt) there were some schools that were just always good and they never stood a chance of winning or placing. The schools always felt that they were at some kind of disadvantage, that they didn’t have what it takes to reach the level of those schools that always seemed to be winning or placing,” Joseph explained.

This was a major reason “we decided to get rid of it (the choir competition.)”

The National Music Festival has been held in its current form for five years, according to Joseph. However, it is something which grew out of previous formats. “Prior to that, (the music festival), we had a choir competition, a solo singing competition and we also attempted an instrumental festival.”

“Because of challenges with funding and other reasons, we decided to consolidate all those various festivals and competitions into one music festival.”

On the influence of foreign pop culture on the festival, Joseph said: “That we cannot run away from. The influence will always be there.”

However, he pointed out that the St. Aloysius RC Boys did focus heavily on percussion instruments, and to those schools more financially-challenged, the musician also wanted to use the aforementioned school as an example because they were very creative when it came to coming up with the instruments they used, stating: “As you may have noticed, they used buckets. It’s an idea I was trying to spread throughout the schools because you know what it’s like with funding and to purchase instruments. But we want to show the schools that with homemade instruments or materials around the place, you can actually make music and make lovely music as the RC Boys did. It was a very nice percussion ensemble.”

He also hopes that with increased attention to music from the schools and teachers, it can raise the quality of the music festival to an even higher standard: “In the future, I would really like to see the standard improve, a lot more to the point where you wouldn’t hear a child singing off-key. I believe we can reach that level, where every single person who sings for every performance, you would just go ‘wow!’ And that’s really the level we want to reach.”