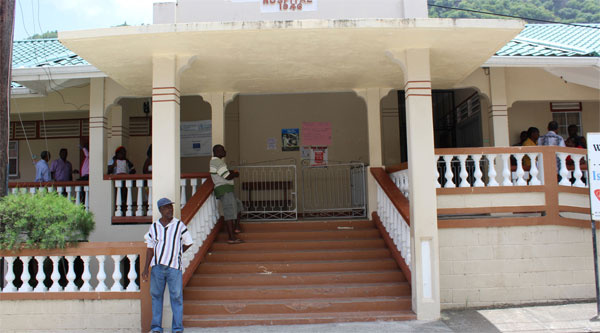 OFFICIALS from the Ministry of Health and other agencies will be meeting this week to smooth out plans for continued provision of quality health service for Soufriere and environs, following a fire at the town’s lone hospital that caused it to be decommissioned on Saturday.

That meeting will determine how long emergency services will be offered at Etangs Wellness Centre, which will operate on a 24-hour basis, and at the St. Isidore’s Hall of the Catholic Church, where all primary healthcare services will be based.

The fire, which was so intense that it destroyed the mental wellness section, the maternity section and a room that held supplies for the entire hospital, was the second fire at the health facility in less than a month.

The first fire was not as destructive as last Saturday’s and was quickly put out by staff, residents and fire officials of the town, causing little damage to the facility.

“Basically, the hospital has no supplies to operate on at the moment,” said Herod Stanislas, Soufriere’s representative in parliament.

Saturday’s fire caused extensive structural damage to the hospital and the loss of vital pieces of equipment and supplies.

Stanislas identified some of the equipment lost in the fire as new incubators, scales, thermometers, and more.

Investigations have begun into the cause of the fire which, Stanislas said, has inconvenienced the residents of Soufriere. He called on the fire service department and the police force to do a thorough investigation to determine the cause or causes of both fires.

The Primary Healthcare Section of the hospital was not damaged and, as a result, all salvageable items within the facility will be removed and relocated until the investigation and an assessment of the damage have been complete.

Dr. Fredericks said the Pan American Health Organization (PAHO) has been alerted about the fire as replacement supplies and equipment may need to be procured.

Meanwhile, Minister for Health and Wellness, Senator Mary Isaac, has extended her sympathies to the people of Soufriere for the loss of use of the hospital, which has provided them with health services for many years. She assured, however, that her health team is moving swiftly to relocate all services which were offered at the Soufriere Hospital.

Said Isaac via a press release: “Our medical team is doing their best to ensure that services offered at the Soufriere Hospital continue uninterrupted at different facilities. Counseling services will be made available to anyone who may be traumatized as a result of these events. I wish to thank Fr. Albert for allowing us to use St. Isidore’s Hall as our outpost in the community for non- emergencies such as mental wellness, NCD treatment and so on.

“Our nurses, staff of the Ministry of Health, staff of St. Jude and Victoria Hospital, the Soufriere Fire Department and other fire personnel, the commissioner of police and other personnel, my Prime Minister and other ministers who were able to make it to the scene in record time and everyone else who’s spirit is with us as we go through this tragedy, I say thank you. I ask that the people of Soufriere and all of St. Lucia bear with us as we continue to ensure that we maintain peace and tranquility on our beautiful island.”