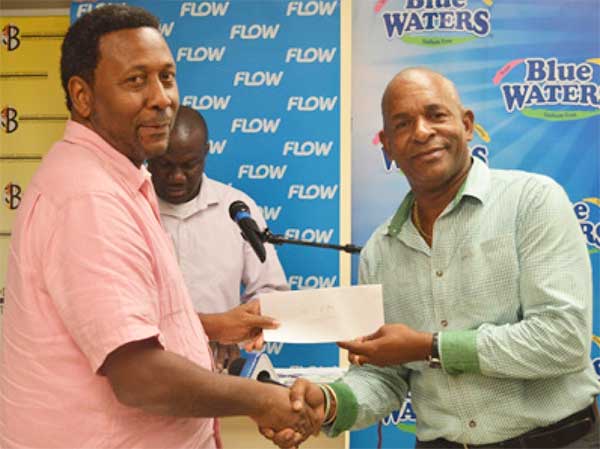 VIEUX Fort South senior men’s football team made a clean sweep of the awards presented at Wednesday evening’s prize-giving ceremony for this year’s Blackheart Production tournament. The event, held at the players’ pavilion at Daren Sammy Cricket Ground, also saw organizers pay out over $50,000 for the recently-concluded tournament.

The monies paid out covered the sanction fee to the Saint Lucia Football Association (SLFA) for hosting the tournament, goals scored, transportation, and prize monies for teams which participated.

Among those taking home the big money was Vieux Fort South Football League, whose team won the tournament for the second consecutive year. They went home with a grand total of $30,950, which included an additional $5,000 towards youth development in the VFS league.

Some of the sponsors and media personnel were recognized for their contribution in having made this year’s event a tremendous success.

Vieux Fort South goalkeeper Vino Barclette copped the top individual award. He was named tournament MVP as VFS did not concede a goal in the entire tournament as he made some outstanding saves. He received a Samsung J7, plus a 30-day prepaid Combo plan from Flow. Barclette earlier captured the best goalkeeper award.

Speaking at the prize-giving ceremony, CEO of Blackheart Productions, David Christopher, congratulated VFS for their championship win, adding that this year’s tournament was the most terrible year for Blackheart family.

He said, “If you check between 2013 and 2017, 2013 was when we were just about peaking. We fell back, right back to what it was. The weather played its part, and we still had good football. The economic situation in the country was another factor; at least, we delivered the tournament in a big way. We must say kudos to the sponsors for their continuing support.”

Saint Lucia Football Association President, Lyndon Cooper, congratulated Vieux Fort South for winning the tournament and those who made the tournament the success it was.

“I want to use this opportunity to encourage every single one of you to recommit to this tournament in the next four years,” he said. “I am saying this because it gives all of us an additional avenue to see more talent and to be able to create an atmosphere that is definitely going to benefit this country’s football.

“For the teams who did not win in 2017, my word of encouragement is let’s make 2018 a brighter year for all of us. Rest assured that the SLFA is committed to the continued development of football and is prepared unconditionally to sit and commit itself to any organization that shares the views and aspirations to this brand of football.”