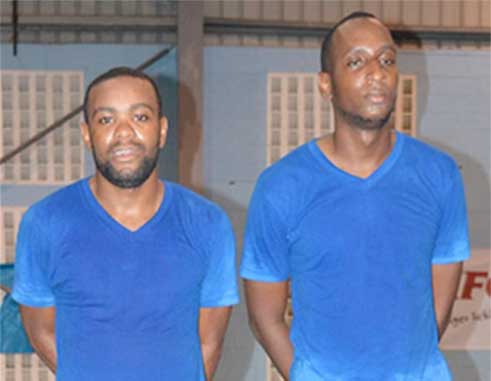 THE excitement, loud shouts and friendly rivalry continued on Friday evening in the 2017 Corporate Warfare Futsal Competition with wins for WASCO and 1st National Bank while Renwick and Scotiabank played to an exciting draw.

Following Friday night’s showdown, a whopping 78 goals have been scored from 17 matches, the most coming from Group E with 15 from 4 matches and 13 each from Groups C and F with a combined 8 matches, respectively.

In Game 1, WASCO defeated Saint Lucia Fire Service 4-3 and booked their ticket to the round of 16.

Richard Annius put WASCO in the lead in the 2nd minute and Lambert Samuel extended the scoreline in the 15th minute to enjoy the halftime advantage.

SLFS quickly moved into gear in the second half of play as Devon Jules scored in the 21st minute to make it 2-1. But two quick strikes from Ian Sylvester in the 23rd minute and Richard Annius in the 28th gave WASCO a 4-1 lead with 12 minutes to go.

SLFS’s Levi Altidore scored in the 30th minute to cut the deficit to two while teammate Mosley Jules’s 36th minute goal sent the BIPF crowd into a frenzy with four minutes remaining on the clock. However, WASCO breathed a sigh of relief when the final whistle was blown.

In Game No. 2, 1st National Bank sent Courts packing and out of contention as they defeated them 3-1 with goals from Jason Gustave in the 1st minute (the fastest goal thus far in the tournament — 21 seconds) and another in the 39th minute and Dusty Daniel in the 23rd minute.

The final match on the night between Scotiabank and Renwick and Company was a thriller as both teams showed skill, composure on and off the ball and at times some physical upbeat.

Niale Alexander put Scotiabank ahead in the 5th minute with his third goal of the tournament. Seven minutes later, Renwick striker Shaquille Degazon’s right foot shot eluded Scotiabank’s goalkeeper to make it 1-1 and that’s how the first half ended.

Alexander scored his second goal of the tournament in the 25th minute to take his personal tally to four. As was the case in the first half, Degazon equalized in the 30th minute, sending the Renwick supporters into celebrations.

The encounter became a ding dong battle. Scotiabank nosed ahead yet again in the 35th minute with a beautiful taken shot by Sheldon Germaine as he waltzed past two Renwick players in the defense. This time it was Scotiabank fans who were celebrating as the clock continued to wind down.

But there was still some energy left in Renwick’s tank as Jason Avril’s 39th minute goal halted Scotiabank’s celebration to make it 3-3, with both teams collecting 1 point each for the draw.

Matches continue tomorrow following Saturday’s break. From 6:30 p.m., C.O.Williams play Sandals; the latter are in a must-win situation as it is their final game in the preliminary stage. In their first game, they drew 4-4 with SLASPA.

In Game No.2, Du Boulay’s Botting Company (DBC) play CPJ and, like Sandals, CPJ are in a must-win situation as they went down in their first game versus Goddard 3-2.

All eyes are expected to be focussed on centre court for the final game on the evening as defending champions Teachers Union will be up against Ministry of Infrastructure. This one is expected to go down to the wire as Infrastructure will be coming all out following their 3-all draw against St. James’s Club while Teachers Union only need a draw to secure their spot in the round of 16.