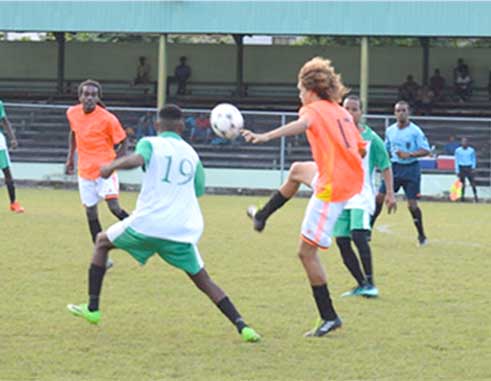 FOOTBALL action continues in the inaugural Mayor’s Cup football competition tomorrow at two venues. From 2:00 p.m., Goodlands will play Radix at the Morne playing field, while Flow Lancers FC will come up against Big Players at the Marchand Grounds at 4:00 p.m.

Despite not kicking off with the planned opening ceremony and march past of the participating teams on Wednesday afternoon, Castries Mayor Peterson Francis was still able to show off his yesteryear football skills when he officially opened the tournament with the first kick, much to the delight of the small crowd in attendance.

In the opening encounter, Betta Finkers, representing the La Clery League, lived up to their name as they defeated a hapless Pavee United team from the Marchand League 2-0.

Following the meeting of the teams by Mayor Francis, the game kicked off with Betta Finkers taking the field with only nine players against their full-strength opponents. The first half resulted in both teams having a fair share of the exchanges with a number of telling scoring chances being squandered. However, Pavee failed to capitalize on their numerical advantage. Halftime scores: nil-all.

The second half almost mirrored the first with Betta Finkers being more purposeful despite their disadvantage. However, against the run of play Mawi Anderson shot them in the lead to register the first goal of the tournament in the 60th minute.

Betta Finkers soon after were reduced to eight players as one of their players got a red card by Referee Nigel Mathurin, and it was at this stage that Pavee United appeared lackluster, failing to capitalize on a number of presented scoring opportunities. Following one of these, Beta Finkers pounced on their prevailing chance with Daniel Sayers sealing the issue with a goal in the 70th minute.