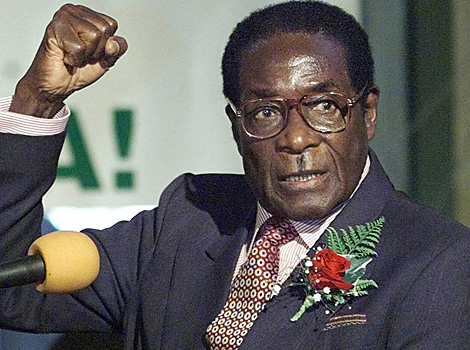 AFTER years of imperial rule, the people of Zimbabwe (formerly Rhodesia) seemed to have gotten a much-needed sigh of relief when Robert Mugabe came to power and that country gained independence from Britain.

So special was the moment of a new beginning for Zimbabweans that the Caribbean’s only musical superstar at the time, Bob Marley, performed his anthem, “Zimbabwe”, in Harare in 1980. But even as change was on the horizon for the newly-named nation, that concert was delayed momentarily as security forces did their best to quell civil unrest in the city. In hindsight, that might have been an omen of atrocities to come.

The opening lines to Marley’s “Zimbabwe” read: “Every man has a right to decide his own destiny/And in this judgement there is no partiality/So arm in arms, we’ll fight this little struggle/ ‘Cause that’s the only way we can overcome our little trouble…” Today, Zimbabweans find themselves not only trying to overcome years of oppression and their land being snatched from them, but ridding themselves of the man who taught them about struggle nearly five decades ago.

Earlier this week, Mugabe, 93, was placed under house arrest after the military ostensibly effected a coup against him. While the military, which has propped up Mugabe’s dictatorial reign all these years – has denied it was indeed a coup, the move followed Mugabe’s sacking of his Vice-President, Emmerson Mnangagwa, last week. Mugabe’s disappointment came after Mnangagwa indicated that he was vying for the presidency in 2019, in which the dictator’s wife, Grace, is expected to be a candidate.

There are many parallels between Mugabe and U.S. President Donald Trump. Firstly, they are both narcissistic in nature and believe that their countries need them more than they need their countries. They both exhibit a brash approach to their politics, which is, but not limited to, breaching set protocols if need be to achieve their goals.

In an age where technology has proven to either create new governments or topple old ones, the likes of Trump and Mugabe find it difficult to flourish, even if it seems that they have all the power in the world to face down rhyme and reason. Moreover, even political parties, constituents and military might are showing that they are willing to risk everything to replace dictators with leaders who have attributes that reflect respect, prosperity, security and stability.

But the likes of Mugabe and Trump do not materialize out of thin air – it takes people to get such leaders in positions of power that later translates to undermining the power of the people. In Mugabe’s case, there were many world leaders at the time of his rise to power who felt Zimbabweans deserved better. In Trump’s case, however, it turns out that a complicated network of scenarios cost Hillary Clinton the presidency.

With just under a year into his presidency, Trump has already attracted the ire of both Democrats and Republicans. On Wednesday, House Democrats introduced five articles of impeachment against Trump, including obstruction of justice for Trump’s decision to fire former FBI Director James Comey; two emoluments clause violations, undermining the independence of the federal judiciary and undermining the freedom of the press. However, since Republicans control both houses of Congress, it is unlikely that their efforts will ever realize the desired results.

Nevertheless, both Mugabe and Trump are being treated as red herrings by their counterparts and critics. Since 2002, when Zimbabwe withdrew from the Commonwealth, the country has virtually been given the cold shoulder by nations, some of whom actually assisted in it breaking away from colonial rule. In Trump’s case, his erratic behaviour has many questioning whether he is indeed fit to follow, let alone lead.

On two continents, two men find themselves perched with the bull’s eye of a new wave of people thinking outside the box by deciding that they might be better off taking their destinies seriously by ensuring that they do not hire despotic politicians who preach change for the better before taking office but turn out to be the worst decision the people made.

Sadly, there are Mugabes and Trumps in every part of the globe.