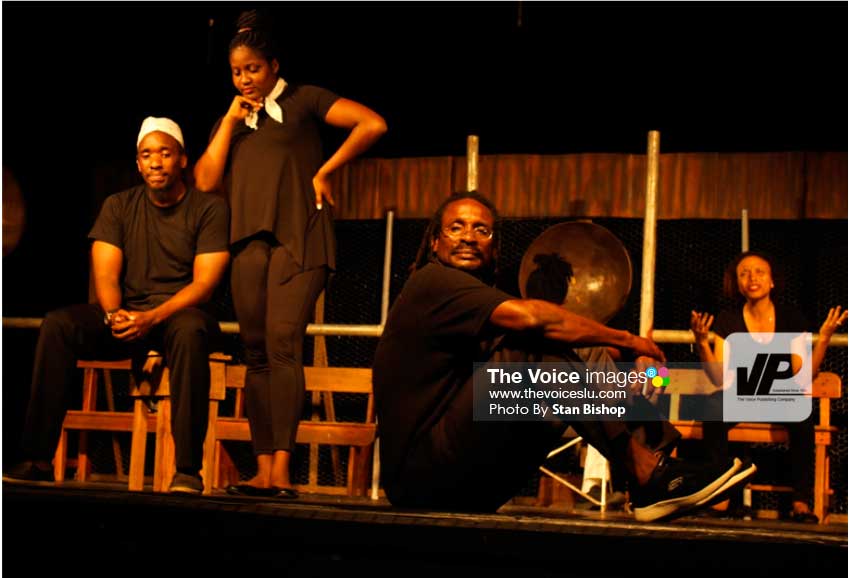 FOR many years, Roderick “Roddy” Walcott spent his time and energies carving a cultural niche into Saint Lucian society. This man of many talents – playwright, screenwriter, painter, theatrical director, costumer and set designer, lyricist, literary editor and carnival band leader – has racked up an enviable legacy that speaks to his deep devotion to the advancement of the arts. Today, his work lives on through generations determined to sustain that legacy.

At the time, the Arts Guild was deemed a leading proponent for arts and culture in the region, and brought its rich and riveting performances to audiences locally, regionally and internationally. Walcott was also the leader of the famed Turks Carnival band as well as a key pioneer of Saint Lucian carnival.

As a playwright, Walcott’s works were infused with varying themes, often highlighting the saint Lucian way of life. His plays include “The Harrowing of Benjy” (1958), “Banjo Man”, “The Legend of Tom Fool”, “The Expatriates”, “The Image of Canga Brown”, “A Flight of Sparrows”, “The Education of Alfie”, “Malfinis”, “The Trouble with Albino Joe”, “Shrove Tuesday March: a play of the Steelband”, “Chanson Marianne” (1974), “Romiel et Violette” (1979), “The Guitar Man’s Song”, and “The Wonderful World of Brother Rabbit”.

For his tireless efforts at promoting Saint Lucian arts, Walcott became an Officer of the Order of the British Empire in 1976. In 2003, he was awarded the Joseph Devaux Lifetime Achievement Award at the M&C Fine Arts Awards, as well as Saint Lucia’s Medal of Honour (Gold) for outstanding contribution to Literary and Performing Arts.

Roddy Walcott died on March 6, 2000 in Ontario, Canada at age 70. However, his influence continues to be felt in the hearts of people everywhere whom he has inspired through his works and congeniality. For the past few years, too, his works have been coming to life, thanks to the determined efforts of the Youth In Arts Theatre Company (YIA), run by acclaimed director, June Frederick.

YIA, which was registered in May 2016, is a not-for-profit company which focuses on the development of educational and entertainment (Edutainment) programmes in the arts for children and is the umbrella company for YIA Theatre Crew (13-20+ years), KiddiCrew Theatre Company (7-12 years), KiddiCrew Project Masq’ Camp and YIA Masqueraders.

Earlier this month, YIA presented its third Annual Roderick Walcott Production, “Shrove Tuesday March & Pan Beating”, directed by well-known director, KendelHippolyte and ably assisted by Michelle Theobalds, in tribute to Walcott and his work and also to give audiences an appreciation of the scope of his artistic intellect.

The two shows — held on November 1 and 2 at the National Cultural Centre — drew small crowds but, according to Frederick, while larger audiences would have been a good thing, she believes that things will eventually pick up for theatre arts as far as that aspect is concerned. The production was reprised in Laborie last Saturday.

Aside from the fact that putting on such productions does pose some challenges – financially, especially – Frederick said there were some comforting aspects on the undertaking, including feedback from the audience.

“Based on the number of students who attended on the Wednesday afternoon and who participated in the question and answer session at the end of the show (Theatre Arts students have to do a critique of a live performance for the CXC SBA), Youth In Arts (YIA) Theatre Company is satisfied that we are on the right side,” Frederick said.

The production ran just over 90 minutes and brought to life the nostalgia of a Saint Lucian way of life, steelpan, in an era when steelpan was held in high regard and played a critical role in Saint Lucian carnival. Through the captivating performances by the actors, patrons got some insights on the strong significance of that relationship.

The production was a first for Jaimie Forde, who said that despite not having previous theatrical experience, he found himself playing roles in both segments of the production. On performing in a Roddy Walcott production, he said: “Our school system is so not our school system. It’s just a bunch of people from somewhere sending us things. We don’t get to learn (about our people). We know there’s somebody named Roddy Walcott, who is Derek Walcott’s brother, and that’s all we know.”

He continued: “We might know the names of some of the works he did, or maybe read it once. But we know nothing past that. So to be participating in it and understanding the history and cultural relevance was a good thing.”

Another actor in the production, Christopher Duncan, who worked with Hippolyte on theatrical projects before, said the recent production gave him the chance to learn more tips and techniques from the grand master.

“I’ve always been looking forward to working with Kendel again,” Duncan said. “Interestingly enough also was that everyone the pan beating segment had been a teacher at some stage. It helped because they brought in their experiences. So that was a wonderful thing, a truly wonderful experience.”

Richard Ambrose, too, said the experience was an interesting one for him also, especially being part of Youth In Action because of the inclusion of Hippolyte in the mix.

“I think the infusion of Kendel is one of the things that allowed for people in the theatre arts milieu who, by their very presence and training, beg the question: what’s happening to the industry? So it was amazing for that linkage to be made,” Ambrose said.

Ambrose said his involvement in theatre arts has made him a richer person in terms of the information he has learned throughout the years, including about Roddy Walcott, who basically helped to build the foundation of where Saint Lucian theatre is today. He hopes that the relevant stakeholders realise that without the requisite support, theatre runs the risk of becoming obsolete in a society which has produced many giants in the field.

“For me, theatre is economic and needs to continue being economic until the powers-that-be explain to us or allow us to develop the industry in that sense,” Ambrose said. “We have this gap in generations for us to learn about. There are people who are still around and people who have left. When I reflect on what Kendel is doing, that’s the feeling I have…There so much that needs to be done.”