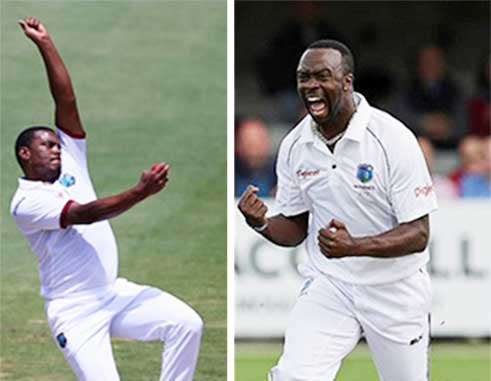 ICC NEWS
Windies pace bowler Shannon Gabriel has moved into the top 20 of the MRF Tyres ICC Test Player Rankings after the drawn second Test of the series against Zimbabwe in Bulawayo which his team won 1-0.

The 29-year-old from Trinidad and Tobago, who held a career-high 18th place earlier this year, grabbed four wickets in the match to gain five slots and reach 20th position. He is now the highest-ranked Windies bowler, overtaking leg-spinner DevendraBishoo, who is in 22nd place.

Gabriel is accompanied on the way up by new-ball partner Kemar Roach, who has gained four places to take 23rd position on the table after finishing with five wickets in the match.

Century-makers Jason Holder and Shane Dowrich also have something to cheer about after their 212-run eighth-wicket partnership in the Windies’ only innings of the match.

Captain Holder’s knock of 110 has lifted him five slots to 57th place while Dowrich’s innings of 106 sees him gain 17 places and reach 83rd position. Opener Kieren Powell is another one from the side to move northward, by five places, to reach 63rd position.

For Zimbabwe, Hamilton Masakadza has gained eight places to reach 41st position after scores of 147 and five, while Sikandar Raza’s knocks of 80 and 89 have lifted him 12 places to a career-best 44th position.

Peter Moor (up 18 places to a career-best 77th) and wicketkeeper-batsman Regis Chakabva (up nine places to 93rd) have also made significant gains.

Raza’s career-best haul of five for 99 in the match has also lifted the off-spinning all-rounder to a career-best 83rd position among bowlers after a gain of 24 places.

There has been no change in the MRF Tyres ICC Test Team Rankings with the Windies retaining their pre-series 75 points for eighth position and bottom-placed Zimbabwe gaining two points.