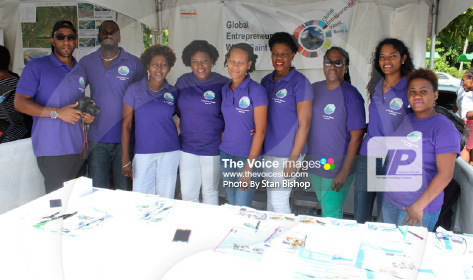 THERE is no denying that even the idea of a heavy reliance of fossil fuel to feed the energy needs of the global economy is quickly going up in smoke. With the changing dynamics in geopolitics and the ever-present danger of air pollution threatening not only the stability of the globe but also crude oil prices, renewable energy seems the best alternative.

Last Saturday, the Department of Sustainable Energy held its annual Energy Week exhibition at Massy Mega car park where several local companies showcased their goods and services aimed at reducing the carbon footprint on the globe. The exhibition was held under the appropriate theme, “Rethinking Energy: Shaping A Resilient Community”.

Sherman Edgar, Managing Director of SGD Engineering Inc., a company located at Vide Bouteille, was among the exhibitors. He said the event provides the platform to portray some of the energy-saving products offered by the company: solar water heaters and inverter air-conditioning units.

“The global trend right now is about saving energy,” he told The VOICE. “I believe it is important to all that we are enlightened on the needs of the world in terms of saving energy. As a company, we try our best to disseminate that information to our clients.”

Edgar, an energy engineer by profession, said he specializes in energy, and has a background in energy equipment and saving energy-saving tips. While he credited the Ministry of Sustainable Development for spreading the awareness of energy efficiency, especially through hosting such events and lowering the amount of CFCs released into the atmosphere, the work needs to be amplified.

“They are trying, but at the same time, more can be done,” Edgar said. “Some of the policies can be revisited to allow more of the commercial sector to take advantage of the renewable energy sector.”

Edgar said the solar water heaters his company sells are manufactured in Barbados. Because of regional trade agreements, his company is fortunate enough to not pay exorbitant customs duties and other taxes to import the units. However, the inverter air-conditioning units do not get that special treatment because his suppliers, although they are CARICOM-based, do not manufacture the units within the region. Nevertheless, he believes the benefits outweigh the odds.

“It’s worth it in the long-run. It does cost a couple hundred dollars to buy an inverter air-conditioning unit. But in the long-run, once it is used correctly, you can save between 40% and 60% on your electricity bill. If you currently heat water using an electric heater, the solar water heater can actually pay itself off in two years if you choose this method instead,” Edgar explained.

Jean-Michel Parle, a Systems Development Engineer at LUCELEC, was busy explaining to patrons a scale model of his company’s plans for a new solar farm earmarked for La Tourney, Vieux Fort. He said LUCELEC, the country’s national electricity provider, has always supported and participate in the exhibition from the inception.

“This year, our focus is on the 3 megawatt solar farm that we’ll be building in Vieux Fort,” he said. “This is the closest we’ve ever been to it. The project has been signed, there was a groundbreaking ceremony and the project has started.

“So we think it’s time that it’s unveiled to the public so that they can get some information on what exactly it consists of. So we’re happy to be here because we can support the government’s initiatives in moving towards more sustainable energy.”

Parle said LUCELEC and the Government of Saint Lucia were working jointly on a National Energy Transition Strategy (NETS) that was completed a few months ago, which should be unveiled soon. He said NETS is a forward-looking plan which spells out what we need to do to secure a sustainable source of renewable energy and keep our reliability where it is.

He also had some tips for customers to reduce cost: “Customers should look at their situation and do what they determine is the best course of action. They need to look at their consumption, their needs and what cost they’re able to bear. My advice would be to first look at energy efficiency at home.”

Valerie Leon, Permanent Secretary in the Department of Sustainable Development, also spoke to The VOICE last Saturday, saying that Government has a target of 35% dependence on renewable energy by the year 2025 and 50% by the year 2030.

“That is going to be achieved with a mix of solar, geothermal and wind,” she said. “It’s all part of our National Energy Transitions Strategy (NETS). We are trying to feed two birds simultaneously. So we’re trying to reduce our dependency on fossil fuel and what we’ve committed to under the Paris Agreement in reducing our carbon footprint.”

Saint Lucians, she said, should learn from the experiences of the mid- to late-2000s when consumers experienced spikes in the price of crude oil that hit US$140 per barrel.

“We understood it when we went to the supermarket and noticed that the price of everything was going up,” she said. “Even transportation cost was going up. So the government realized that we needed to move away from that dependence on fossil fuel.”

Leon said the activity is a small initiative that has huge implications because Government is now trying to educate people as to what is available and how they can partake and help reduce the reliance of fossil fuel. From a government perspective, she said it is more about energy security and energy independence rather than reducing our carbon footprint.

“There are duty-free concessions on renewable energy products,” she noted. “So if you were to bring in anything the government has assessed and determined that is related to renewable energy or energy efficiency, you can get them in duty-free.”

She added: “There are also special concessions on energy-efficient vehicles. For example, if you were to bring in a hybrid vehicle, instead of paying the normal 35% import duty, you’ll now pay only 10%.”

Charlene Bodley, Acting Energy Officer, Renewable Energy Division in the Department of Sustainable Development, said the event was inaugurated in 2014 and came about when government realized the critical role of the private sector in any transition into a sustainable energy future.

Government, she said, decided to create an activity that would bring together the private sector and also allow them to showcase what is offered in terms of renewable energy and energy efficiency, technologies and services.