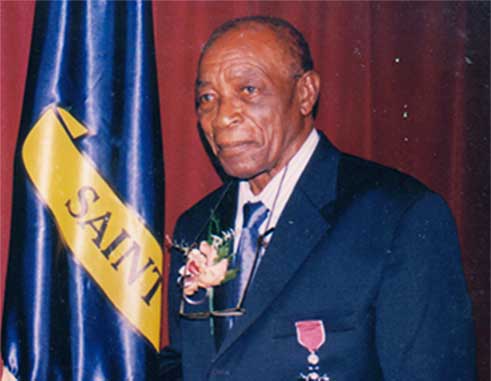 Born on June 7, 1923, in Castries, Pat attended the Laborie Boys Primary School under Headmaster Testenier, and although he was successful at the entrance examinations to St. Mary’s College, he was unable to enter this famous institution because his family could not afford the sixteen dollars per term school fee that was required for attendance in those days of the depression.

On leaving school, he worked as an apprentice with his father, Mr. Daniel Mason, who with his white, well-starched uniform and white shoes, was regarded as one of the best stone masons in the country. Thus, the genetic buildings DNA plus the practical building experience with his father paid dividends later in life.

Soon after the Second World War, Pat along with other young Saint Lucians like Charles Cadet, GreahamLouisy, John Compton, the Mason brothers Clendon and Maurice, Dunstan St. Omer and Claudius Thomas migrated to the Dutch Antilles to work at the Anglo-Dutch Shell Company. It was while working at the oil refineries that these young men were exposed to economic, scientific, social and historical literature and so assisted in their further education.

On return to Saint Lucia in 1951, Pat was able to obtain a job as an architectural and engineering draughtsman of the Public Works Department. While there, he was tutored by the well-qualified and respected colonial engineer, Mr. Wint (brother of the famous Jamaican, AnthecaWint). He thus became a competent Engineering Assistant and was even transferred by the colonial government to assist the Public Works Department in St. Vincent and the Grenadines.

Pat pursued his formal training in the applied science of Engineering in the United Kingdom, terminating his studies at the Imperial College of the University of London. He took pride in being a diplomat of the Imperial College. After appropriate post graduate studies, he was awarded the fellowship of the Institute of Structural Engineers (F.I.Struct.E.).

As a true Caribbean man, Pat worked as a Civil Engineer in Montserrat, Grenada and Barbados. He was engaged as an International Structural Engineer on large complex engineering projects in London, Boston and New York.

In his native Saint Lucia, he served as Chief Engineer with the Ministry of Works. One of his first major engineering home projects was the re-alignment and widening of the then narrow, torturous and dangerous Morne Road, which became of tremendous economic benefit to the nation, as it allowed the banana trucks to deliver their ‘green gold’ to the Castries wharf much easier than previously.

Another engineering marvel was the upper Manoel Street Bridge (commonly called the Pat Brown Bridge) crossing the Castries river. He was responsible for several other government- funded engineering projects involving the building and construction of roads, primary and secondary schools, bridges (e.g. Roseau) and government buildings.

On leaving the Civil Service, he provided structural engineering services to private sector clients as well as the public sector. He contributed significantly to the growth and expansion of the tourism sector, particularly in projects at Rodney Bay and the Jalousie and AnseChastanet developments in Soufriere.

There is no doubt that Pat was highly regarded as a Supreme Engineer. He is considered to be the best Structural Engineer that Saint Lucia has produced and was given the Lifetime Achievement Award by the Saint Lucia Association of Engineers.

He became a Member of the British Empire (M.B.E.), an award bestowed on him by Her Majesty the Queen, for meritorious contribution in engineering. He was considered to be the patriarch of mason professionals in Saint Lucia.

Besides being knowledgeable in Mathematics, Physics and Engineering, Pat was a voracious reader and was au courant on a wide variety of subject areas such as History, Economics, Politics, Philosophy, Sociology and contemporary world affairs. He has been a prolific columnist in respected Saint Lucian newspapers – The VOICE, Star and Crusader. His articles were varied and effective and have been erudite, profound, lucid, penetrating and insightful and always with an informative historical perspective.

He was a member of Neville Skeete’s Cabinet comprising Conrad James, Richardson St. Rose, Blakes Theodore, Claude Griffith, Hilford Deterville, Darnel Martial, Leo Clarke, Trevor Phillip and Calixte George. At ‘Cabinet Meetings’, he demonstrated clarity of thought, an unusual ability to put his point of view with precision, and was analytical to a fault. He was a great communicator and was able to explain theoretical principles for a layman to understand. He was also very current on issues of the day and innovative with ideas.

Pat never aged. In fact, when some members of the Cabinet visited him at home about two weeks before his passing, we were amazed at his mental abilities under the circumstances. Even at that stage, he was giving instructions on beam sizes to a colleague. At our last Cabinet meeting, in his honour, someone posed the question: “When shall we all meet again?” The answer was — given that with climate change, a topic that Pat was well versed in — that it will be in lightning, thunder and rain.

He always ensured that his family had the best that he could afford. As a strong believer in the power of education, which he himself had experienced, he provided adequately for the education of his children to the highest level of their abilities. His love for wife, children, grandchildren, great grandchildren was phenomenal.

He also showed a considerable measure of attention to his siblings and their families and his generosity to them all showed no bounds.

Pat was very well-known and respected throughout the towns, villages, hamlets and watering-holes of the Saint Lucian community. His kindness and generosity to all will long be remembered.

May he rest in peace.

NOTE:William Patrick Brown (Pat Brown) passed away on September 4, 2017 after a brief illness. He was 94.

The name William Patrick Brown was synonymous with the science of engineering. Pat was very popular in his lifetime and became popular in his death as his funeral was postponed three times.

We were on the verge of the burial when the hospital insisted on performing an autopsy, then there were the rains which caused the country to be shut down, and the government needed one day to organize a military funeral for him.

At the funeral, there were many tributes; however, our feature speaker was Calixte George, a great and dedicated friend of his.