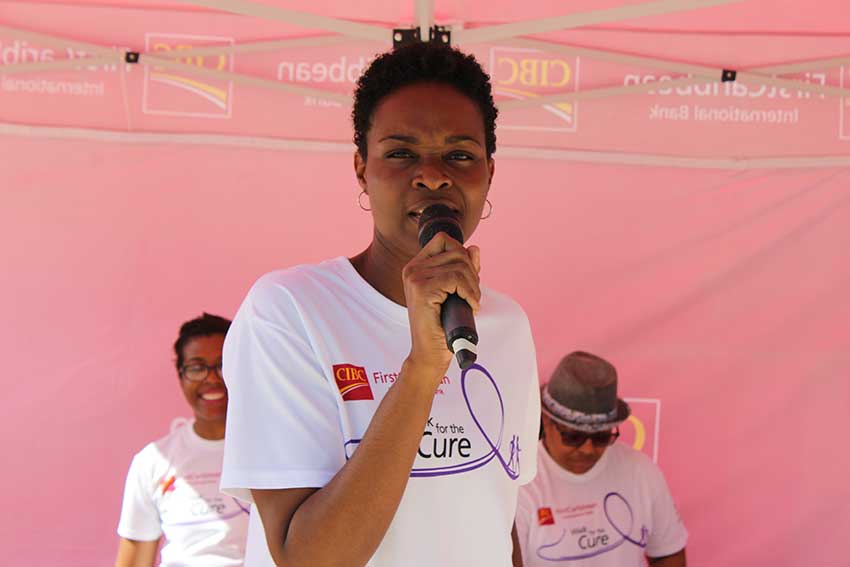 The early morning walk was held simultaneously in the north (from the bank’s Rodney Bay branch to Pigeon Island National Landmark) as well as in the south.

Through its partnership with the St. Lucia Cancer Society and Faces of Cancer St. Lucia, CIBC FirstCaribbean International Bank provides support to people living with cancer and creating awareness about the disease.

Dr. Owen Gabriel, who also did the walk, said it was both pleasing and empowering to see CIBC FirstCaribbean make the walk a staple on its calendar.

“It is also encouraging because CIBC FirstCaribbean has led the way in showing how corporate citizens can play a role in ensuring the good health of our country,” he said.

He added: “At one point or another, every one of us comes in touch with our mortality. So today I was very pleased to see many of our cancer survivors walking with us. This is testimony to the work that CIBC FirstCaribbean has been doing because a lot of patients find it difficult in their journey to getting cured and treatment because of their financial limitations. So that’s the role at CIBC FirstCaribbean: supporting cancer patients, families and the cause.”

Eugenia Fagan, a cancer survivor, joined the scores of people on the walk. At the prize-giving ceremony held at Pigeon Island that morning, she shared her journey with the disease which affects many Saint Lucians and is one of the leading causes of death.

In 2008, Fagan was diagnosed with parotid gland cancer, which affects the main salivary gland. She first noticed a small lump behind her ear which resulted in a slight pain that lasted about a year and a half. She finally went to an EMT and was told that she would be fine if she took painkillers.

However, Fagan went to the United States and sought a second opinion. It turned out that the root of her pain was a growing tumour. That October, she had surgery and did radiation therapy. Since then October, she said, has been a very special month for her.

After returning to Saint Lucia, Fagan said she did follow-ups with her local physician, Dr. Gabriel. Her life, she said, changed dramatically since then.

“First of all, I had to depend on God, family and co-workers,” she said. “I tried to be at peace with myself, my fellowmen and God. Besides the eight doctors I saw, I decided to make a new start, including taking care of my nutritional needs, exercise, rest and being temperate in all things.”

In 2015, Fagan went back to Dr. Gabriel, who suggested that she travel to Martinique for a CT scan which revealed that there were four nodules on her lungs. The test, she said, revealed that she had secondary tumours. Nevertheless, she is determined to remain focused, positive and adamant that she can beat the odds.

“I have never given up,” she stressed. “I have continued this journey and told myself that I have to move forward, that I have to live and not die. It’s all in the mind,” said Fagan, a self-confessed vegan.

She added: “We have had so many wounded soldiers who have gone down. But I stand here to say that I want to be a mouthpiece – so that I can tell people they can make it through it if they’re willing to do it.”

Also participating in the northern walk this year was acclaimed musician/producer Francis “Leebo” Delima, who was diagnosed with Stage IV cancer last year and recently returned to Saint Lucia from Florida where he underwent treatment. Fagan said she was “really moved” when she saw the popular musician walking the route.

“I know where he has been. So when I saw him passing me along the route and that he was actually stronger than me, I told myself that I had to make it through. It gave me that courage to go forward,” she said.

Fagan encouraged fellow walkers to give support to family and friends of those who have cancer. Without that support, she said, the disease wins.

Dr. Tamara Remy, President of the St. Lucia Cancer Society, said her organization is willing to work with anyone working to fight cancer, including raising awareness.

“Cancer is not a death sentence. So I would love to thank CIBC FirstCaribbean for giving everybody a platform where we can just talk about cancer. It’s not a secret – we all know a person who has been afflicted by cancer,” said Dr. Remy.

Dr. Remy also encouraged Saint Lucians to be mindful of their health as well as becoming members of the St. Lucia cancer Society.

The walk ended with the release of purple balloons in memory of those who have died from cancer.