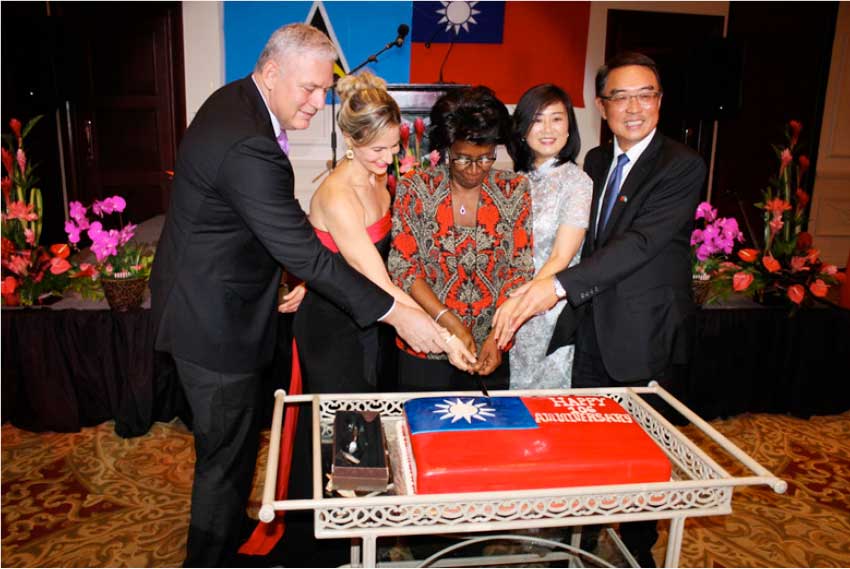 During a reception hosted by the Taiwanese Embassy at Sandals Grande Saint Lucian Spa & Beach Resort on October 6, Chastanet said Saint Lucia was “grateful for the new open-mindedness” achieved between the two nations and is “looking forward to the new way forward on a basis of mutual development”.

Chastanet’s remarks came as the Taiwanese Embassy celebrated Taiwan’s 106th National Day (celebrated annually on October 10, and referred to as Double Tenth Day). Chastanet noted that, like every nation, “National Day is an important occasion for celebration as well as for reflection.

“The people of Taiwan have much to be proud of and Saint Lucia lauds and, if not, is jealous of your attainments,” he said.

The Prime Minister said despite Taiwan being a relatively small state, it has demonstrated that development strides should not be restricted to size. He said Taiwan’s excellent achievement in technology, innovation, agriculture, trade, industry, education and healthcare, has established the Asian nation as an example for other countries to emulate. That is why the Saint Lucia/Taiwan diplomatic ties remain crucial, Chastanet said.

“Relations between our two states have continued to grow since the re-establishment of diplomatic relations in 2007,” said Chastanet. “In June 2015, Saint Lucia opened its embassy in Taipei, our first embassy in Asia. Ambassador Shen presented credentials in March this year, succeeding Ambassador Mou, reaffirming Taiwan’s continuing interest in our development and furthering our relationship.

Earlier this year, Taiwan agreed to provide visa-free travel for Saint Lucians wishing to visit Taiwan effective July 12, 2017. The measure was agreed to on a reciprocal basis.

“This level of cooperation means that the lives of many Saint Lucians – medical doctors, farmers, entrepreneurs and others – have been and continue to be touched in one way or another by Taiwan’s generosity as a development partner,” Chastanet said.

Chastanet added: “As we move forward, we are keenly aware of our shared concern for the development of our people but also for the preservation and protection of this planet which we call home. Like Saint Lucia, Taiwan is very active in the promotion and attainment of sustainable development goals as a collective responsibility of all nations. We will no doubt support each other in mutually-beneficial ways to enhance our development as well as to promote such shared values on the international stage.”

Chastanet thanked Ambassador Douglas Shen, asking him to convey Saint Lucia’s gratitude to his country for Taiwan’s kindness, assistance and sustained interest over the years.

“We celebrate with you in the assurance that Taiwan will consolidate its achievements, innovate and prosper, and that on your 110th anniversary, the list of accolades of the government and people of the Republic of China (Taiwan) would be that much longer,” Chastanet said.

Saint Lucia is one of 20 nations with whom Taiwan has diplomatic relations – one of six from the Caribbean. The two countries established diplomatic ties in 1984 under the John Compton-led administration. However, in 1997, when the Dr. Kenny Anthony-led administration took office, those ties were severed in favour of the People’s Republic of China.

When Sir John’s UWP government regained the seat of government in 2006, a ‘Super 8’ group from his government reportedly overrode his wishes and reestablished ties with Taiwan in late April 2007. Since then, Taiwan has invested heavily into Saint Lucia’s development, including through the CDP, scholarship programme, agriculture, healthcare, trade and information technology.

With a projected gross domestic product (GDP) of US$567 billion for this year, Taiwan is the 22nd-largest economy in the world. Historically, both Taiwan and Saint Lucia have shared similarities: mountainous islands with limited natural resources, are former colonies and once depended heavily on banana production, and are democratic models of government.

Ambassador Shen also gave assurances that Taiwan intends to honour its friendship and obligations to Saint Lucia for many more years, calling for Saint Lucia to help promote Taiwan’s quest for recognition on the international stage.

“As our two countries both embark on our respective new endeavours, I foresee Taiwan playing a more active role in the infrastructure and economic development of Saint Lucia,” Ambassador Shen said. “At the same time, I urge Saint Lucia to continue supporting Taiwan’s meaningful participation in international organizations. I want to take this opportunity to thank Prime Minister Allen Chastanet for acknowledging Taiwan’s contribution at the last U.N. General Assembly.”