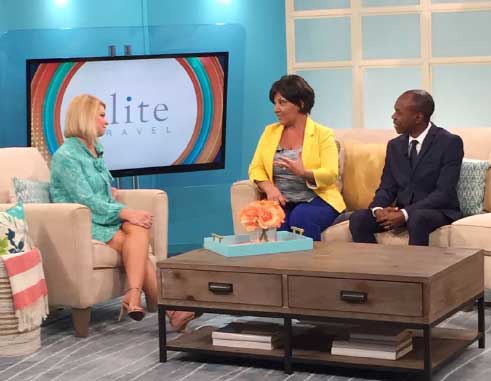 PRESS RELEASE – CAPITALIZING on the successes of this summer’s Saint Lucia Showcase — North America, the Saint Lucia Tourism Authority, ably assisted by Minister for Tourism, Dominic Fedee, has followed up on the increased interest in the destination with a number of media activities.

Over the last few weeks, the SLTA has been engaged in a promotional drive with a major U.S. network via a series of interviews showcasing Saint Lucia. Aired on ABC Tampa Bay’s Morning Blend Show, the Minister was the featured guest on the show’s Elite Travel segment along with CEO for the award-winning Elite Travel, Tammy Levent.

During the interview, the Minister took the opportunity to promote the island as a choice destination with a wide range of attractions. The United States continues to be one of the largest source markets for the island and is showing promising growth in 2017.

The Saint Lucia Tourism Authority’s recently-released July 2017 visitor arrival figures show a 14 % increase in the U.S. stay-over arrivals. Speaking about the beauty and diversity of the island, Minister Fedee remarked: “I don’t think anyone can tell you about Saint Lucia or any photograph depict its true beauty… You just have to go…you just have to feel it.”

Levent highlighted the variety of properties available to fit the needs of vacationers and commented on the warmth and beauty of the people and how it adds to the appeal of the destination, saying: “Everyone makes you feel welcome…it is not one of those destinations where you are nervous about where to go or what to do. We encourage you to leave the property… there is just so much that the island has to offer.”