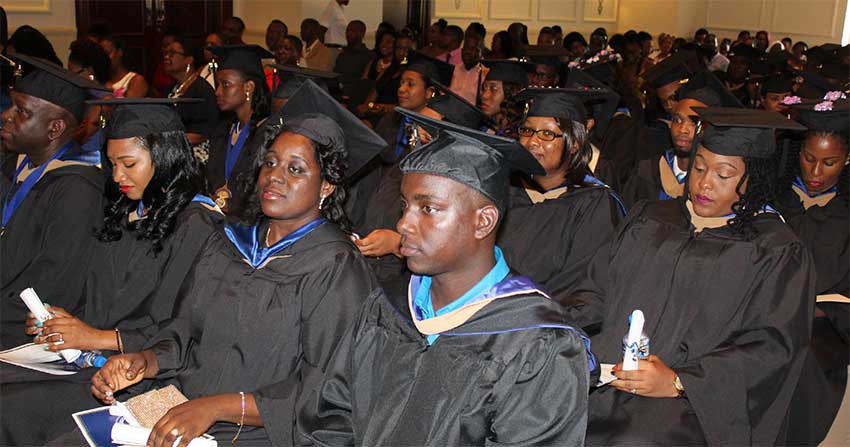 IN the past decade, nearly 1,000 students from various countries have graduated from Monroe College’s Saint Lucia campus. But the college, which held its tenth annual graduation ceremony on Sunday, October 15 at Sandals Grande Saint Lucian Spa and Beach Resort, has had to overcome many challenges getting to that point.

Nearly 20 students graduated at the inaugural ceremony ten years ago. Nine days ago, nearly 70 did. It is an achievement even Alex Ephrem, Senior Vice-President, at King Graduate School – which falls under the Monroe College fray – knows all too well, having served at the Saint Lucian campus for many years.

“The past ten years have been very challenging, but we have taken every challenge in stride,” he said. “We have survived and today is not the time to dwell on the past but to embrace a brighter future as we celebrate this wonderful occasion.”

Marc Jerome, President of Monroe College, flew into Saint Lucia from New York for the graduation ceremony. It is a trip he has taken every year to ensure that graduates hear from the proverbial horse’s mouth just how invaluable a Monroe College education means in today’s fast-paced global environment.

Jerome prefaced his address by paying tribute to Governor General Dame PearletteLouisy, who last month marked her twentieth year in the post. He said Dame Pearlette’s tenure has served as an inspiration for people who dare to succeed. He also presented a plaque to Dame Pearlette for her sterling service to country and support for Monroe College over the years.

Jerome, the grandson of the college’s founder, also congratulated the graduates and wished them well in their future endeavours, adding that they will remain part of the Monroe College for life.

Feature speaker, United States Ambassador to Barbados, the Eastern Caribbean and the OECS, Linda Taglialatela, told the graduates that venturing out in a competitive world that changes by the minute, with hard work, commitment and dedication they can make their aspirations become reality.

Taglialatela implored the graduates to acknowledge everyone who played a part in their success. She also encouraged them to continue learning the skills, network with others, be a team player, go the extra mile, step out of their comfort zones and thanking others — qualities they will need to adapt to the ever-changing world. She also urged them to keep striking for a balanced life.

“For some reason, we talk about a balance between life and work,” Ambassador Taglialatela said. “Unfortunately, work is life. Some of us work to enjoy life (while) some of us make work our life. But, basically, you have your personal life and your professional life. This is not a dress rehearsal – you get one chance and there are no do-overs. What you do today cannot be done over again tomorrow.”

She added: “This is a new beginning, so go out there. You’re going to find the world to be fun – sometimes scary – and most of the times challenging. But it’s going to be your life and your world.”

Permanent Secretary in the Department of Education, Allison Jean, told the graduates that government is focused on achieving the goal of having at least one tertiary-level graduate in every home in Saint Lucia, emphasizing that education plays a crucial role in changing things for the better.

“As we grapple with many changes in this world, such as climate change and adaptation, higher levels and more sophisticated crimes, intense storms and other natural disasters, we need to find solutions to these problems in order to make this world a place within which we can survive.”

Ashley Celestine, of Dominica, was among the Monroe College class of graduates this year. She did a Bachelor’s Degree in Public Health, started her programme in 2014. She told The VOICE that her journey was one of persistence, loss and achievement.

“It’s been tough but my main focus was on not giving up,” Celestine said. “Even when my mother would tell me to return home to Dominica, I’d tell her that I wanted to finish what I started. However, it was very sad today that she couldn’t be there to see me graduate because she passed on August 9. It’s hurting me.”

After calling Dr. Sonia Alexander, Director of Academic Office at Monroe College, to tell her that she did not reserve her graduation gown due to her mother’s passing and that the deadline for doing so was up, Dr. Alexander told her she would call her back.

“I got a call from Dr. Alexander afterwards and she told me that she had secured a gown for me. Water came out from my eyes that day. I just want to say a big thank-you to everyone who has helped me along this journey, especially Prime Minister Roosevelt Skerrit for paying my schooling,” she said.

“Right now, I’m an Environmental Health Officer in Dominica. However, I hope to further my education so that I could give back to my government and people of Dominica,” Celestine said.

Another graduate, ErwintonMaximin, of Saint Lucia, earned a Bachelor’s Degree in Criminal Justice. Employed with Monroe College for the past nine years, starting off as a security guard and later becoming Public Safety Supervisor, Maximin said he just had to be part of that programme. Greeting everyone as they came and left the premises, he said, was one thing but actually being part of the learning experience was one of his long-time achievements.

“It took me five years of hard work and dedication but I accomplished it through the support of many people,” Maximin told The VOICE. “It felt great going onstage at graduation. With God, anything is possible. In spite of the challenges, I never gave up. I always believe that I can do anything I set my mind to.”

Maximin also had some advice for anyone second-guessing following higher learning: “I think that if we want to make a change in the world, we have to aim for it. It’s not a matter of just saying, ‘Yes, I want to do it’. You have to really work towards achieving it. My whole aim is to be a corporate lawyer, so I’m not stopping. I’ve just started.”