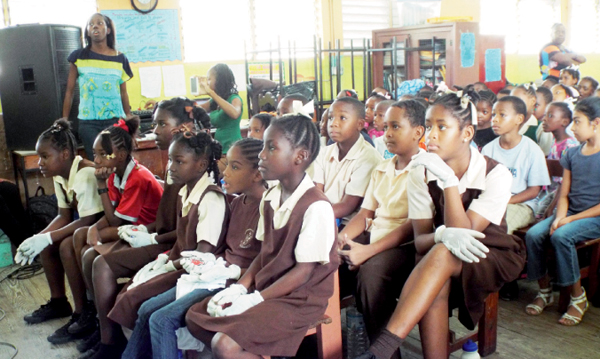 THE legacy of one kind-hearted mother has continued to gain strength and support as she, along with a number of sponsors, went on to bless youngsters for the tenth year running.

Fredreika Joseph-Leon, General Manager of M&C Drugstores, is the brainchild behind the “Keep Kids In School” Programme which culminated on Monday at St. Aloysius R.C. Boys Primary School.

Joseph-Leon unwittingly began the programme over a decade ago when she began sponsoring two underprivileged boys who were in the same class as her son at the school.

Since then, like a rolling snowball, the initiative has grown in size and momentum, and resulted in hundreds of underprivileged students receiving the materials and uniform needed to keep them in school.

Joseph-Leon’s initiative came from a place of gratitude as she, too, came from humble beginnings and, with the help of three scholarships which earned her two Bachelor’s Degrees and one Master’s Degree, she fought and worked her way to success.

Today, with her humble beginnings at heart, the mother of two is paying it back and is placing special focus on boys.

During a similar ceremony last year, Joseph-Leon said: “The programme really began with the need to keep our boys in school and so the R.C. Boys School has a special place in my heart. We need to give our boys a fighting chance and there’s no better way than to keep them in school.”

At Monday’s ceremony, Joseph-Leon, who is the programme’s coordinator, was present, as well as Liz Altifios, Human Resource Coordinator of M&C Group of Companies, with a monetary donation from the management team to be used for the school’s feeding programme. Also present were Manda Leo of Duboulay, Anthony and Company Law Firm, who also made a monetary donation towards the school’s feeding programme, and Fern Wilson, Junior Brand Manager from WLBL, with a donation of 10 cases of Supermalt.

Leo encouraged the boys to stay motivated and had them recite:
“I am awesome
I am smart
I am incredible
I am phenomenal
I got this.”

Meanwhile, Wilson lauded the works of Joseph-Leon and her colleagues at M&C for their meaningful efforts. She said it was an honour to be able to help with the students’ nutrition by contributing the mineral and vitamin-rich drink.

“Supermalt admires the work that the M&C Drugstore team has put towards providing schools with the assistance needed to ensure that the most vulnerable students are provided with the nourishment needed to function in school. So we were more than happy to join forces with them to add a contribution of 10 cases of Supermalt to the R.C. Boys School,” said Wilson.

Joseph-Leon reminded the boys that they are an important factor in society and that they should do their best to live up to what is expected of them.

“The boys are the future leaders of our country and it is important that they have a strong foundation,” she stressed. “They need to stay in school as well as listen to their teachers and parents. Learn, learn, learn and remember the motto: NOT FOR SCHOOL BUT FOR LIFE!”

School supplies were also donated to other schools, including Ciceron Infant and Primary Schools. However, the RC Boys School was the only one to receive monetary donations.