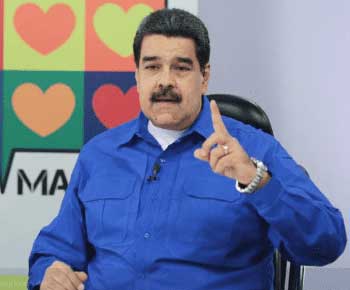 PRESS RELEASE – VENEZUELAN President, Nicolas Maduro, says his recent international tour to Algeria, Russia, Belarus and Turkey has left him with the conviction that his nation “is not alone and has the sympathy, solidarity and support of the whole world.”

Speaking on his Sunday television show, Maduro said the series of visits would strengthen economic, industrial, financial, and political cooperation.

The head of state said he held talks with more than 25 ministers from the world’s oil and gas producing countries and aims to call a presidential summit at the end of the year or in early 2018.

“We had honest and good conversation. I made my proposal for the new formulas for pricing, which has already begun the debate, and I envisage a summit of heads of state and government very soon, at the end of this year or beginning of 2018, a summit in a place to be agreed upon by OPEC and non-OPEC countries,” he said.

Maduro added that, “We are already going to move our proposal, we hope, in the next weeks and months, in a free debate. I am sure that we will achieve a consensus formula that will change the market and the formula to fix oil prices, and that will have direct impact on the gas.”

Several significant deals were signed during his stay in Ankara: “We signed a set of agreements and we are opening up very important roads with Turkey.”

Maduro said that with socialism it is impossible to establish a dictatorship because they are incompatible concepts, rebuking the accusation levelled by some countries against his government.

The Venezuelan President explained that a dictatorship “imposes on society its designs that are only possible in capitalism, when economic groups are in assault of political power and imposed on majorities.”

“The existence of a socialist dictatorship is impossible because it is the genuine power of the people,” said Maduro.

In addition, he accused the Venezuelan opposition of being foolish because they seek to damage “everything they can sabotage to provoke the annoyance of the people” to impact the Bolivarian Government.

However, the president urged the resumption of dialogue with them in the Dominican Republic which, he said, was suspended because of the negativity from the right.