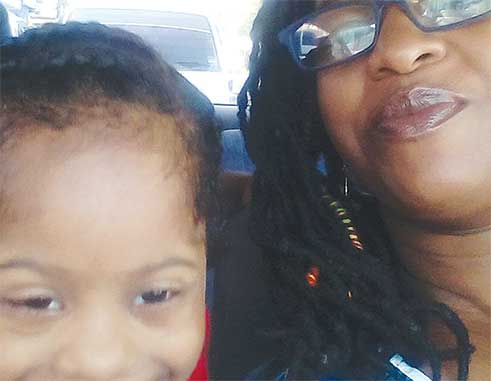 SERA Gordon is a mother on a mission. She is determined to change the way people see and treat those who have Down’s Syndrome. Her firsthand experience with the condition, she said, is enough for her to be a relentless crusader in the fight against ignorance. Even better, she’s fighting this battle to give her four-year-old son, Liam, a chance at living a normal life.

After finding out that Liam was born with Down’s Syndrome, Gordon said she was crushed. Her heart sank and she didn’t know what to expect. While it’s everyone’s wish to want a ‘normal’ child, she said being told that Liam had Down’s Syndrome left her thinking about what to do and what was going to happen. She had to think fast and come to grips with the reality that Liam was, after all, her son.

“I had no time for self-pity because Liam needed medical attention and my focus had to be on him and nothing else,” she told The VOICE recently. “I cried a lot – when I was alone, when I was with him, and I felt sorry for myself and him. But I knew that my son needed me and I couldn’t give him any negative vibes. I had to give him only positive vibes because children feel what you feel.”

SOME KNOWLEDGE ABOUT DOWN’S SYNDROME
In the human body, every cell has a nucleus, in which genetic material is stored in genes. These genes carry the codes responsible for all inherited traits and are grouped along rod-like structures called chromosomes. Usually, the nucleus of each cell contains 23 pairs of chromosomes, half of them inherited from each parent. When a person has a full or partial extra copy of chromosome 21, Down’s Syndrome results.

Physical traits of Down’s Syndrome include low muscle tone, small stature, an upward slant to the eyes and a single deep crease across the centre of the palm. There is no cure for Down’s Syndrome.

In the late nineteenth century, John Langdon Down, an English physician, published an accurate description of a person with the syndrome, earning him the title of “father” of the condition that had featured prominently in art, literature and science for centuries.

Gordon said she knew a few basic things about Down’s Syndrome while she attended Anglican School in Castries. After school, she and the other students saw many of the kids from Dunnotar School coming down the nearby La Pansee Road.

“I felt sorry for them because of the name-calling they had to endure,” she lamented. “I knew then that I didn’t want a child with Down’s Syndrome because I didn’t want my child to go through what I saw those kids went through.”

Liam is non-verbal but is able to call his sister and father. As far as making sentences, he cannot. For instance, if he wants something in the fridge, he’ll beckon someone to the fridge. As long as the fridge door is opened, he knows exactly where his stuff is. Gordon said he has great understanding and even started school but had to drop out because he was always ill with the flu. He is expected to return to school in January, she said.

Gordon said Liam has never had counselling. Nevertheless, she recently made an appointment with the Childhood Development and Guidance Centre so that they can meet with a speech therapist.

Since he was born, this has been his best year, she said, adding that over the years, Liam has been in and out of doctors’ offices and hospitals to have thyroid and other tests done. The focus was on getting him healthy rather than putting him into an environment that would be bad for the child who also has a former Road March winner as his favourite.

“He is the life of the party. His favourite artiste is Mac 11. I don’t think there’s one song that Mac 11 that Liam doesn’t know. In fact, if any song is playing and the beat is good, he’s going to drop everything and stand up and dance,” Gordon said.

However, he does have his moments: “He’s very friendly; however sometimes he doesn’t want anyone to touch him. Sometimes he would go and sit and be in his own little world, after which he would come out and be without everybody.”

REQUISITE SUPPORT STILL LACKING
Insofar as getting Liam the requisite assistance he needs, Gordon said there was no one she could have reached out to after Liam was born. Her plight was further amplified by the fact that many parents with children with Down’s Syndrome tend to hide their children because they do not want people to know they have a child with a disability. Even in the maternity ward, the indifference seems real, she said.

“No one tells you what to expect when you have a child with Down’s Syndrome. They tell you that your child will not be able to go to school and that your child is slow. But they do not actually prepare you for the amazing child that you’re going to have and the amazing things that child is going to do. You get the negatives but never the positives,” she explained.

She continued: “You need someone else with a child with Down’s Syndrome from whom you could get advice and help you go through those steps. That’s why having association that caters to the needs of and creating awareness of people with Down’s Syndrome is important. Right now, I’m speaking with Sarah Flood (Castries Central MP) of CARIFAM towards starting an organization for parents and children with Down’s Syndrome.”

A few years ago, government instituted a $200 monthly allocation for parents who have children with disabilities. While the measure seems at least a small step towards recognizing the fact that such assistance is important, Gordon said the amount pales in comparison to the actual needs of caring for someone with Down’s Syndrome.

“I just began receiving it because his doctor recently reminded me about it,” she said. “However, $200 is not enough. I mean, I don’t expect any government to foot any parent’s medical bill. What I’m saying, though, is that even if we go to the health centre, the prescriptions are the same. Sometimes you’d go to the pharmacy in the health centre and cannot get the medication.” Medication is expensive, she said, adding that aside from giving the $200 monthly allowance, government should consider giving discount cards which can be used when purchasing medication for people with Down’s Syndrome.

CREATING AWARENESS
With October designated as World Down’s Syndrome Awareness Month, Gordon said that included among the things she believes need to be prioritized is people working towards removing the stigma attached to people with Down’s Syndrome. That is why, she said, she has made it her duty to start an awareness campaign via her Facebook page by posting photos and anecdotes about Liam’s journey. She’s also part of a few online organizations that offer support. Everyone, she said, needs to show that they care.

“I want everyone to become involved. Down’s Syndrome is not a disease. People do not suffer from Down’s Syndrome – they suffer from our ignorance and the stigma. Spend one hour with someone with Down’s Syndrome and you would see things differently. We can even start instilling that knowledge from the school level. We need to see the ability and not the disability,” she said.

Having a child with Down’s Syndrome, Gordon admitted, has caused her to slow down, enjoy life and be patient. Some of the most important things she has learned through caring for Liam are patience and unconditional love.

“There are times when Liam would be in hospital when I would wish I could take his place because I didn’t want to see my son suffer,” she said. “I want Liam to live an enjoyable life. I don’t want to die knowing that my son is left behind in a society which, instead of uplifting people, brings them down. That used to be my biggest fear but the support from my family has been strong. So I thank my mom, and Liam’s dad, Kevin.”

SOLVING THE PUZZLE
Far from being the puzzled mother when Liam was born, Gordon now seems adamant that she can replace the public’s misinformation about Down’s Syndrome with tolerance, love and respect. She also wants other parents to know that even if they have a child with a disability, that child has a purpose and should be loved, cared for, respected and given a chance to have the best life possible. Just like Liam, she wants them to see their children as that missing piece that is needed to complete the whole.

“It’s like a puzzle of your life. You’ve done the puzzle but there’s this missing piece that you don’t know exists. Then you find out – like I found out – that Liam was the missing piece of my puzzle. After Liam was born, he brought the family closer together and everyone is very protective of him. He’s here for a reason,” Gordon said.