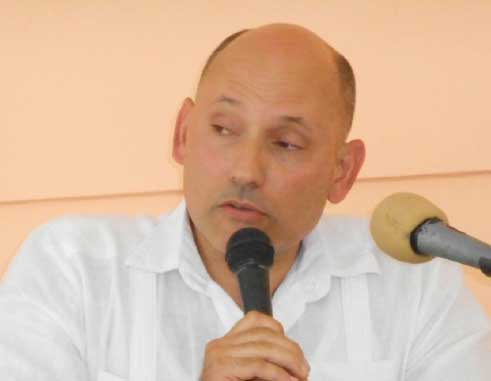 ATTENDEES at the Cuba-St. Lucia Cultural Exchange held at Piaye Secondary School last Sunday had their knowledge broadened on the rich culture and history of Cuba.

Presentations were made by Soberon and St. Lucians who have had a close relationship with Cuba and are versed in its culture, history and challenges.

In his remarks, Soberon lamented that there has been false information regarding Cuba’s elections over the years.

“Our elections have been distorted and ignored in some sections of the media,” he said.

He added that unity has been expressed in the upcoming elections in Cuba which will be held next year.

Commenting on how Cuba is seen by the Western world because of its political system, he said: “We have the right to be socialist, it’s the will of the people,” adding that there is no law which states that a country is bound to adopt a particular political system.

He said despite all that has been said and done to Cuba, his country will continue to defend the cause of the poor and humble and have its presence in all its sister islands.

“Cuba is a defender of the dignity of all human beings. We fight for it,” the ambassador said.

Soberon said the United States blockade has caused Cuba US$130 million, but it has not daunted the spirit of Cubans in pursuing their dreams and aspirations. In fact, the ambassador said Cuba is committed to assisting countries in need of various types of assistance.

“As we speak, there are more than 50 St. Lucians studying in Cuba,” he said, adding that last year 700 surgeries were performed by Cubans doctors on the island.

According to Soberon, despite being badly hit by Hurricane Irma, Cuba has assisted Dominica and Antigua, which were also devastated by the hurricane — and was happy to do so.

President of the Humanistic Solidarity Association (HSA), Marlene Alexander, described the event as timely, adding that it coincided with Cuba’s Cultural Day, which was recognized in Cuba on October 20, and during St. Lucia’s Creole Heritage Month.

“Today’s event is among several new initiatives by the new executive committee geared towards strengthening the association’s membership base and to reposition ourselves as a more socially viable solidarity association,” Alexander explained.

She added that it is also in keeping with the HSA’s mandate, which is “to engender cordial and open relations between the people of St. Lucia and Cuba; to disseminate information about Cuba and to explore the development of cultural exchanges between the two countries.”

Chairman of the southern chapter of the association, Peter Phillip, thanked the Cubans for the assistance given to St. Lucia over the years.