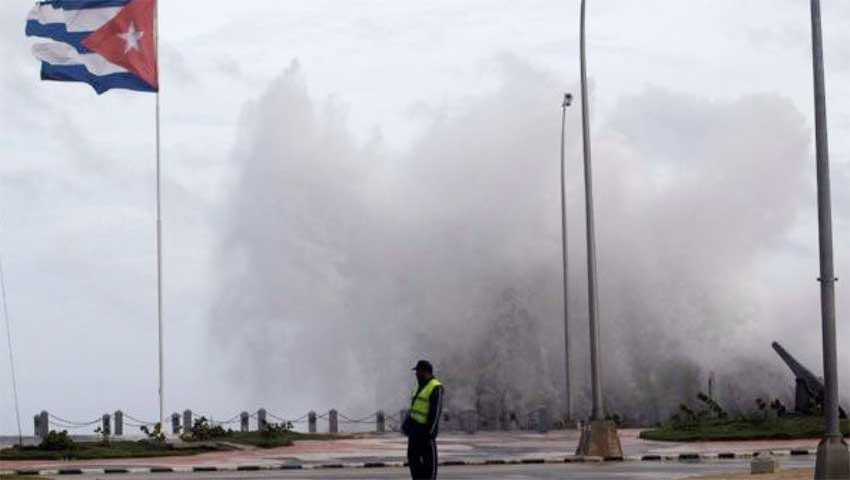 The 2017 season’s first Category 5 hurricane is accompanied by another, Category 4 Jose, following fast in its tracks and along the same route.

That’s the general scenario across the 1,000-mile Caribbean island chain today as Irma, the Atlantic’s worst hurricane ever, continues blazing its trail of death and destruction through hundreds of islands — from the U.S., British, French and Dutch islands in the north, all the way to Cuba, Turks & Caicos, The Bahamas, the Florida Keys, Miami and the entire state of Florida, as well as Georgia.

Not alone…
But Irma is not alone.

The 2017 season’s first Category 5 hurricane – downgraded last week Thursday to Category 4 as it raced towards Cuba — is accompanied by another, Category 4 Jose, following fast in its tracks and along the same route.

Regional fears were also boosted by the 8.1 magnitude earthquake in Mexico, the worst to hit the country in a century, located near the coastal city of Chiapas on the Pacific coast, but felt over 1,000 kilometers away in Mexico City — and across the border in Guatemala.

Just hit by its earthquake of the century, Mexico was within hours hit a sucker-punch by Hurricane Katia — the third system alongside Irma and Jose — immediately after the killer quake that’s already taken 60 lives while search and rescue missions continue.

Victims in areas hit by the quake are also praying that Katia’s rains don’t quicken landslides.

Jamaica and the Cayman Islands remained off its direct track earlier last week, as Irma also skirted the Dominican Republic and Haiti last week Thursday, heading to Turks & Caicos, Cuba and The Bahamas on the second leg of its island rampage.

By the time it hit Cuba’s Camaguey province last week Friday, Irma had long been rekindling sad memories of three ferocious hurricanes that hit the island of 11 million successively between August and September 2008.

Cuba’s last big hit was by Hurricane Matthew last year, which caused over US$2.4 billion worth of damage in the island’s eastern region, but saw no lives lost due to timely protection measures taken by the country’s experienced Civil Defense, aided by a mandatory evacuation.

The island has seen 29 tropical cyclones in the last 20 years, with 19 hurricanes of great intensity.

But this is the first Category 5 to hit Cuba since 1924, causing the authorities to take all measures to relocate up to 700,000 Cuban nationals and fly thousands of Canadians (and other visitors) home, or take them to safe quarters – and long before the unwelcome weather system landed.

Schools and businesses were shuttered and public transportation was ordered suspended across the island’s coastal areas throughout last week Saturday until Irma moved on to Florida.

‘Super-hurricane’
A super-hurricane by all standards, Irma started-off packing winds of 185 miles per hour (mph) or 295 kilometers per hour (kph), causing maximum unease for close to countless islands and some 40 million people in its path.

By far the worst hurricane to visit the Atlantic region since measurements started 40 years ago, Irma dwarfs all in both size and velocity.

Already labeled ‘the worst hurricane in recorded Atlantic history’, some also say it’s ‘the Atlantic Hurricane of the Century’.

Brian McNoldy, a hurricane researcher at the University of Miami says Irma can also easily prove to be “the costliest storm in U.S. history”.

Deadly Damage
After four days, Irma’s damage was already quite huge across the Caribbean:
• At least 23 people are confirmed dead: 11 in French St. Martin and St. Barts, 4 in the U.S. Virgin Islands, 3 in Puerto Rico, 2 on Dutch St. Martin and one each in Anguilla, Barbados and Barbuda.
• Most buildings and homes on Barbuda were either destroyed or damaged, leaving 60 percent of its 1,400 islanders homeless.
• Princess Juliana Airport in Dutch-controlled St. Martin is destroyed, as is its main harbour — and the entire island (shared by The Netherlands and France) is in total blackout.
• The hospital on St. Thomas was destroyed and dozens of patients were relocated to St. Croix and Puerto Rico while several hospitals in affected territories have had to operate on standby generators.
• Fire stations on the small French island of St. Bartholomew and on Antigua are under water and without roof, respectively — and a million people in half of Puerto Rico are without electricity.
• Looting is reported with gunshots heard in St. Martin where a curfew has been imposed, as well as in the U.S. Virgin Islands where dead bodies were also found.

Search and Rescue
Search and rescue and other assistance operations are underway across the region, with leaders of European states with Caribbean colonies making related public statements of concern.

Dutch Prime Minister Mark Rutte complained that citizens of Sint Maarten “are sitting in the dark in ruined houses and are cut off from the outside world.”

Some 12,000 people have been evacuated in the Dominican Republic, where 55,000 troops have been deployed to help clean up.

In Haiti, residents without equipment or alternative places to flee to from hillsides prone to landslides are praying they will be spared the after-effects of Irma’s brief visit.

Irma is already causing weekend blues in Cuba and The Bahamas while Miami Beach is deserted and traffic jams block highways as millions of Floridians take heed of official orders to simply leave town, as Irma’s reach is wider than the entire state.

But with the entire state now an emergency zone and even neighbouring Georgia now prone to be visited by Irma, many Floridians wishing to flee to safety have no place else to go.

Irma wreaked havoc all along its long island track, dashing hopes and raising anxiety all the way.

Rising death toll
The death toll continues to rise with sporadic confirmations in the face of knocked-out communications.

Antigua and Barbuda’s Prime Minister Gaston Browne, who visited Barbuda by helicopter last week Wednesday, confirmed a two-year-old boy was the first Caribbean victim of the super-storm after his home lost its roof and his family tried to escape Irma’s wrath.

French President Emmanuel Macron last week said in Paris that 8 French nationals had died on Caribbean islands flying the French flag, but the number was later cut by half by Prime Minister Edouard Philippe.

Predictions and expectations are that the death toll will rise with time.

No gender bias…
Hurricanes, tropical storms and related depressions visit the wider Caribbean region throughout the annual Atlantic Hurricane Season that hits a high point between August and September.

The Category 5 systems especially hit in the warmer Caribbean Sea and the Gulf of Mexico — including the Florida Strait and several U.S. coastal states — leaving long and lasting trails of damage, but some luckily changing course or weakening before landfall.

With only two weather seasons characterized by rain and sun, hurricanes and tropical storms in the region are annually pre-christened with male and female names by the haloed and hallowed weather trackers at the U.S. National Hurricane Centre in Miami.

But whether named Allen or Wilma, David or Isabel, Gilbert or Janet, Hugo or Rita, Ivan or Irma, there’s no gender bias in the damage they have wreaked across the region in the past century.

Counting the costs
In Antigua and Barbuda where Irma wreaked havoc, Prime Minister Gaston Browne says the island will need at least US$70 million to start its recovery effort.

He got early reasons to be thankful after Venezuela’s President Nicolas Maduro responded positively to a direct call for help and dispatched an armed forces aircraft with 40 volunteers carrying 10 tons of food, water, medical and other emergency supplies.

Venezuelan aircraft have also continued to deliver supplies, particularly for devastated Barbuda, with stops in other unaffected islands, including Saint Lucia, to collect additional supplies, including water.

But with relief efforts continuing in affected islands and assistance being garnered on unaffected ones, no sum can yet be added to cover the continuing widespread in the string of dozens of tiny British, French, Dutch and U.S.-controlled, overseas territories, departments, regions and other non-independent islands in the northern Caribbean Antillean chain, most of which are popular tourism destinations.

Largely spared, Puerto Rico is still counting its costs too, as are the Dominican Republic and Haiti.

But as Irma inched closer to Cuba, The Bahamas and Florida started feeling the pressures of the rising tides – and similar rising tides of anxiety and uncertainty.

Before Irma arrived, Cuba had evacuated over 700,000 residents and over 10,000 tourists either left the island or had been moved to safer locations, while 6 million had been ordered to evacuate from Miami and other parts of Florida in Irma’s path.

Unwelcome visitor
Having wreaked some havoc on all the islands in its path and swirling over northern Cuba, Irma was also quickly heading for Florida last week, followed by Jose — making landfall by Saturday and with Irma’s earlier victims also in its path.

However, even without Jose’s help, Irma – the most potent Atlantic hurricane ever recorded – is already rewriting the records, early becoming the longest-lasting Category 5 hurricane ever to pay an unwelcome visit to the world-famous, globally popular Caribbean island tourism destinations.