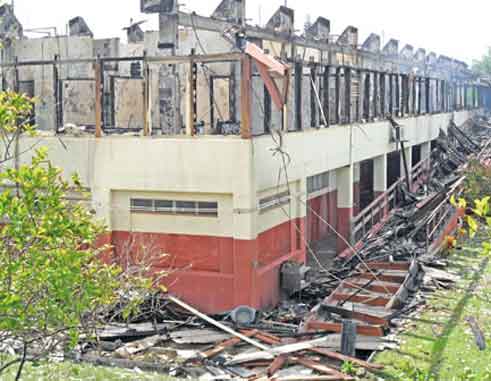 PRESS RELEASE – LAST Saturday marked the eighth anniversary of the devastating St. Jude Hospital fire that resulted in the death of three patients and led to the hospital now operating out of the George Odlum National Stadium.

The fire began in the surgical ward and spread to the pediatric ward and operating theatre.

To mark the occasion, the Board of Directors, management and staff of St. Jude Hospital pay homage to the three souls lost during the blaze, namely Mernus Vigier, Claudius Soudine and Joseph Jn. Baptiste.

The fire brought out the humanity of the public who gave valiantly of their time and effort to assist the hospital with the move into the stadium.

The anniversary of the fire is a sobering reminder of the important contribution St. Jude Hospital makes in the provision of healthcare in St. Lucia, serving a population of approximately 70,000 people.

Even while housed in less than ideal circumstances, in 2016, St. Jude Hospital staff provided care and treatment to 47,355 patients, performed 1053 surgeries and delivered 643 babies.

In recognition of the conditions under which staff operate and the environment within which patients are served, the Board of Directors of St. Jude Hospital affirms its commitment to working with the Government of St. Lucia to successfully transition the hospital to its original site.

The Board of Directors is of the view that this transition should be treated as a matter of national priority.

The anniversary of the fire will be commemorated with a special service this week at the George Odlum National Stadium.