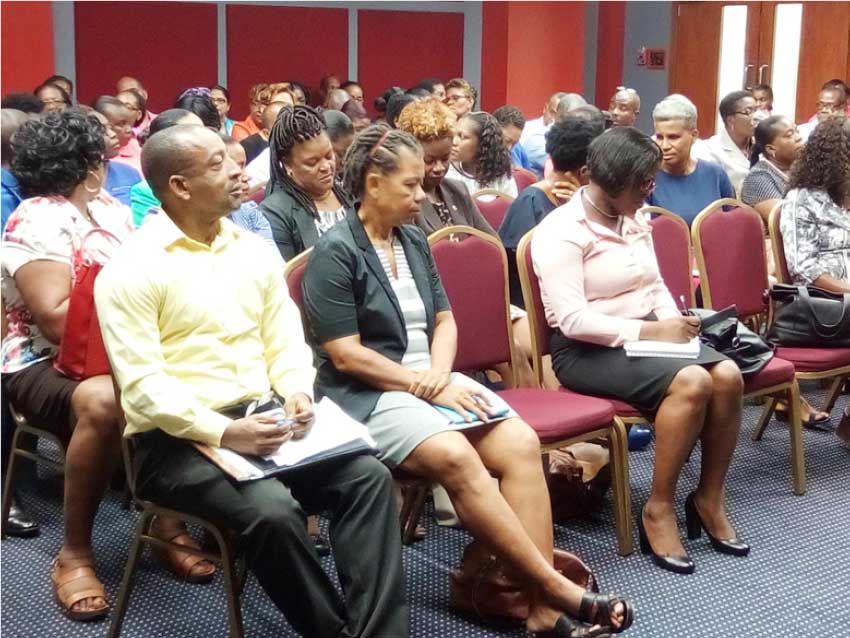 APPARENTLY, the reduction in the Value Added Tax (VAT) from 15% to 12.5%, aimed at putting more money in the pockets of citizens, is doing just the opposite to the coffers of the government.

The Ministry of Education is presently experiencing financial woes to the extent that it is now calling on school principals to work with the Ministry: not just to hold back their complaints about the lack of money needed for the repairs of schools, teaching aids and improving teaching techniques, but to exercise prudence in the management of their resources.

When school principals met with Education and Innovation Minister, Dr. Gale Rigobert, on Thursday at the Finance Administrative Centre at Pointe Seraphine, it was not just to express their problems with the Ministry or the frustrations they have in dispensing their tasks.

It was also a time to bring them up-to-date with new and continuing instructional programmes the Ministry will be rolling out for the academic year; for evaluation and assessment of subject areas and finding solutions to knotty issues encountered with examinations; school-based assessments, inter alia.

But the importance of money to fund current innovative and novel programmes in education could not be overlooked, a point highlighted by Alison Jean, Permanent Secretary in the Ministry of Education, Innovation and Gender Relations.

Pointing to the Ministry’s capital budget of $300,000 as “meagre” after recurrent expenditure, grants, contributions and other components are removed, Jean called on principals to look for areas where “we believe there is wastage and try our best to curtail those areas.”

“We are no longer in the largesse age,” Jean said.

Jean said she did an analysis of the financial situation of her Ministry and the recurrent audit revealed that 75% of the Ministry’s expenditure in education was directed at salaries and wages and from the balance – when grants, contributions and whatever else were deducted – only 12% left.

“We are left with 12% of our expenditure for operating and maintenance of tools and equipment. That should make us utilize the 12% in an effective manner that ensures we are able to deliver on our core business,” Jean said.

She also referred to the perennial problem of untimely school repairs that still disrupt the re-opening of schools across the country, as was the case almost two weeks ago. She attributed this returning problem to the fragmentary work done on schools over the years.

Jean believes it would be better to work each year on at least a small number of schools to bring them back to their original condition rather than take the allotted cash and spread it to all schools on the island as this could only result in disjointed or haphazard work, especially since there is not enough funding for schools.

Both Jean and the Chief Education Officer, Marcus Edward, spoke of an exciting year ahead for the Ministry.

Said Jean: “Over the past few months, we have been doing a number of exciting things in the Ministry, a few new initiatives that really show we are at least ready to advance education in St. Lucia.”

She spoke of the initiative termed #EducateSt.Lucia, which is about ensuring that every St. Lucian receives formal education. This initiative involves removing age as barriers to education: the idea is to provide education to St. Lucians from the cradle to the grave to get the society much more literate.

The Ministry will also be focusing on greater ICT integration in schools as well as on innovation as a component to education. As such, scouting for innovative ideas and projects from students will be done.

“We must try to harness the innovation coming from our students and spin them off into some kind of gainful employment,” Jean said.

Other plans in the works at the Ministry include the reviewing of subject areas, accelerating the Early Learners Programme into full force, building strong literacy skills at the infant level, the development of a mathematics guide and diagnostic tool, and the revamping of the Special Education Programme.