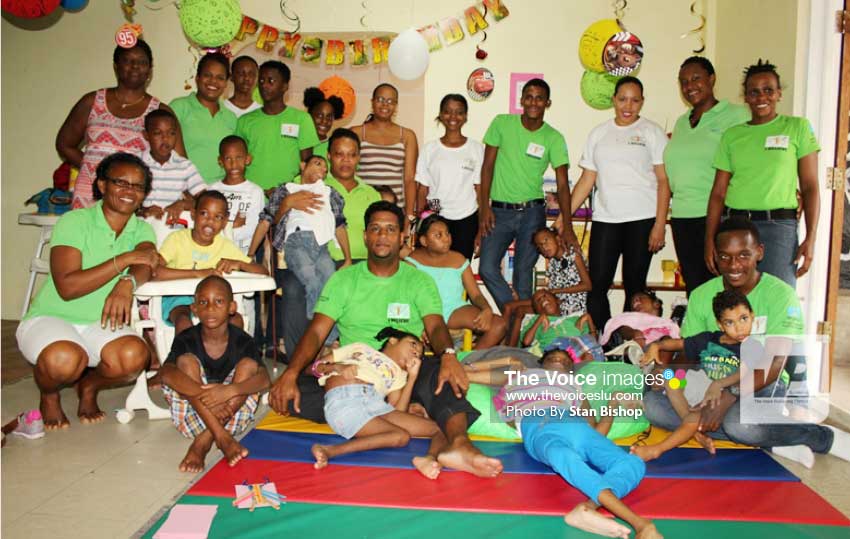 AROUND the world, nearly 17 million people live with a condition known as cerebral palsy, or CP, which is the result of brain injury or brain malformation. Many people with cerebral palsy are born with it while others acquire it later in life.

Considered a neurological disorder, cerebral palsy primarily affects body movement and muscle coordination. As such, people with the condition find it difficult to control muscle movement and it is not uncommon to see them in painful, awkward positions as a result of muscles and limbs stiffening. Other conditions associated with cerebral palsy include problems with vision and internal organs.

Real People, Real Needs
Despite these challenges, however, those with cerebral palsy are real people: they seek and give love, deserve the same rights as everyone else and – most importantly – inspire those who care for them unconditionally.

For the past five years, the Cerebral Palsy Association (CPA) of St. Lucia has been making some progressive strides in creating awareness and championing the cause of those who have cerebral palsy. CPA’s principal aim is to act as a support group for parents who have children affected by the condition as well as advocating for the rights of their rights.

President of CPA, Daria Robinson-Ernest, said CPA focuses heavily on basic human rights such as education, social welfare and medical assistance for its members who are spread across the island. It is not an easy feat, she explained, citing access to medical assistance as an example.

“We take for granted having a ‘normal’ child. But at the end of the day, when you have a child who has cerebral palsy, you find yourself facing a lot of brick walls getting something as basic as medical assistance,” she told The VOICE recently.

Quite often, she said, many children have seizures for which medication is very expensive. The expenses are compounded by the need for additional medical care such as ensuring the children can use their muscles properly. Because of the effects of cerebral palsy, most children are forced to undergo numerous bouts of intervention, such as physiotherapy and any stimulation to allow them to live a normal life.

As such, she believes the State should do more to assist those children – and adults – suffering from cerebral palsy.

“We do not get the support we needed from (as early as) birth,” Robinson-Ernest said. “Most times, you’re aware that the child has the condition from birth and we feel that a lot can be done from the onset to give these children a better opportunity to live a life a normal as possible.”

Challenges
Speaking to the challenges faced and support system needed when caring for someone with cerebral palsy, she said: “Being a parent of a child with the condition, I can tell you that when you’re really faced with the condition, you realise that are really no resources. There are certain things being done but nothing collectively.”

People with cerebral palsy, she said, need a collective body to tackle the challenges posed by the condition because despite physiotherapy being available at the Child Development and Guidance Centre (located in La Clery, Castries), there is no direct synergy with, say, the Ministry of Health or the Ministry of Education. A more concerted effort, she said, needs to be made to correct that anomaly.

“At the end of the day, a basic right for something such as education, we need to ensure that these children get the opportunities,” she said. “Learning needs to be adapted to their needs because they can still learn. There is still an opportunity for their brains to develop and we overlook the fact that there’s a physical challenge and figure that that would affect the child’s learning. But really and truly, we need to cater to the child’s needs.

“Education needs to be individualized because everybody learns differently, especially a child with special needs. So we need to be able to tailor our systems to assist in the proper development of the child.”

In Saint Lucia, facing down stigma has been a perennial task for relatives whose loved ones have cerebral palsy. As a result, it is not uncommon, either, for many people not to take their loved ones out in public for fear of stare-downs that often border on insensitivity. According to Robinson-Ernest, such situations can take a toll on one’s psyche.

“We have a very long way to go as far as removing that stigma is concerned. We feel like we’ve come so far, but when you encounter a situation, you realise that we really have not done enough. In certain settings, you’d realise that some people are still ignorant to the fact that these children can be treated ‘normal’. But the stigma is very much prevalent in society today and we still have a lot of work to do,” she explained.

Better Person
Despite these uphill battles, Robinson-Ernest said caring for someone with cerebral palsy often inspires one to become a better person and teaches just what unconditional love really is.
“It really tests you,” she said. “I remember when my son was a couple weeks old and not knowing what to do and where to turn. But you realise that you have to be that rock and stand up for the child because nobody else will. So it really allows you to step outside your boundaries and just make a difference by making the environment a positive one for the child’s development.”

Special Plans, Programmes and Support
For World Cerebral Palsy Day (October 7), the association’s goals include going out into the community and spreading the positive word about cerebral palsy in an effort to debunk the myths surrounding the condition.

Activities include a church service and family fun day on Sunday, October 1. On Friday, October 6, parents and children will be treated to a train ride through Castries followed by other fun activities at Serenity Park from 5:30 p.m.

The CPA is also encouraging the public to wear something green (the symbolic colour for cerebral palsy) from now through October 6 in support of those with the condition and also create awareness. Also, you can upload your selfies wearing something green to the association’s Facebook page: Cerebral Palsy Association of St. Lucia.

To raise funds, the CPA hosts fundraisers such as bingo nights, auctions and green tie events. The association also hosts several activities to foster greater appreciation for and with parents and children with CP, such as horseback riding, quarterly sensory parties, Christmas parties and respite days. Much-needed support comes from KFC, which has been supporting the association from its inception.

“KFC has made a lot possible for the association in terms of just meeting the needs of the parents and children,” Robinson-Ernest said. “They have gone as far as helping us bring in specialized equipment for seating for the children. They always supported our respite days, family fun days and other activities we organize. They’ve definitely been our backbone. But, like everything else, the more support we can get, the more things we can do. So we’re extending an invitation to other corporate partners to also give us a helping hand.”