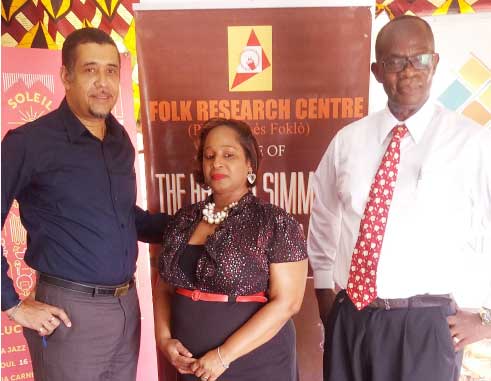 THE jammed packed schedule for this year’s Arts and Heritage Month (formally known as Creole Heritage Month) has been released and organisers have set the bar high with promises of a memorable October.

The big reveal was made at a press conference at the Folk Research Centre (FRC) with featured guest speakers Drenia Frederick, Director of Events at the Cultural Development Foundation (CDF), Thomas Leonce, CEO of Events Company of St. Lucia (ECSL); and Hilary La Force, Executive Director of FRC.

The trio presented the new model for the celebration of Arts and Heritage Month, which focuses attention on local culture and heritage and celebrations are due to be staged across St. Lucia throughout October.

Leonce said the arrangement in place for Arts and Heritage Month speaks to a tripartite formation: with the conceptualisation and design of the month of activities remaining vested in the FRC; a focus on the heritage components; and CDF’s focus on the arts component.

The role of ECSL, he said, is to produce key events as selected by the two abovementioned entities.

“This involves matters of securing venues, contracting suppliers, ensuring the fulfilment of all regulatory requirements, such as NEMO, police, fire service, etc. and, of course, ensuring the presentations made to the public on event days are smoothly coordinated,” Leonce said.

He revealed that there are 12 key events to be staged in October, which will be preceded by the public launch of Arts and Heritage Month on September 24 at the Vieux Fort Square.

“We anticipate that this structure will provide greater effectiveness and efficiency going forward, and we remain prepared as always to take any learning (experience) which should be coming out of it to further enhance the overall product going forward,” Leonce explained.

“Festivals do not belong to Events St. Lucia, CDF, or FRC. We are simply custodians at this point in time as they really belong to all of St. Lucia. So it is very important that all the stakeholders continue to embrace the festivals as they unfold,” Leonce added.

He said there is ample evidence that St. Lucians have embraced their celebration of its heritage and that there is much passion within the arts fraternity.

La Force said that for the past 33 years, the FRC has been involved in observing Creole Heritage Month, after it was declared that October 28 would be observed as International Creole Day, or Jounen Kwéyol Entenasyonnal

When the festival began, it was only held in Choiseul; however, it got too big, so it was later decided that be split up and hosted across the island.

La Force said: “Whereas persons may argue that Carnival is also very big — no doubt about that — but there are persons and religions who don’t believe in that particular activity. But with Jounen Kweyol, it goes across all people, all religions and all ethnic groups. Black people, Indian people, Chinese, Vietnamese — wherever it is in St. Lucia, they all participate in that activity.”

He said he was proud to collaborate with Events Company St. Lucia and the CDF in hosting this year’s Art and Heritage Month.

This year’s events hosts will be Babonneau in the north, Vieux Fort in the south, La Ressource (Dennery) in the east and Marigot in the west.

Each community, La Force said, will be doing something special. Babonneau will host what is called “meats” as well as solo and drum music. In Dennery, there will be a major farmer’s market to showcase the foods being produced in that highly agricultural area, including the making of farine. In Marigot, there will be a music festival where a major foreign artiste will be featured while Vieux Fort will host a potpourri of activities.

“There is something that you can actually look forward to at the various communities,” La Force said.”

Apart from the usual Lawenn Kweyol and spelling and poetry evening, there will be new activities, including Ditè Kweyol, to teach the youth about the benefits of local teas, as well as a Bal Kweyol, a local dance activity. In the run-up to these activities, there will also be dance workshops to teach the various kweyol dances.

La Force said that, with time, the hope is to enhance the festival and make it even better.

CDF’s Frederick said next month’s festival is just one of the many collaborations with the ECSL to produce events and festivals in St. Lucia.

This year’s Icon Series, which was introduced during the Jazz and Arts Festival, was moved to Arts and Heritage Month, as it forms part of the arts component, she said.

The icon being honoured this year is Garth St. Omer, St. Lucia’s first novelist, with a body of work consisting mostly about St. Lucia — the island’s society and psyche. He has written five novels, including “Shades of Grey”. He will be honoured at the National Cultural Centre (NCC) on October 2.

Frederick revealed that there will also be a three-day Kweyol Market at Constitution Park, which will be a one-stop shop for everything St. Lucian, including food and music.

“CDF, along with FRC and the Events Company, are working on a new model of collaborating together to produce events that are of a high standard and quality that the St. Lucian public will appreciate,” she said.