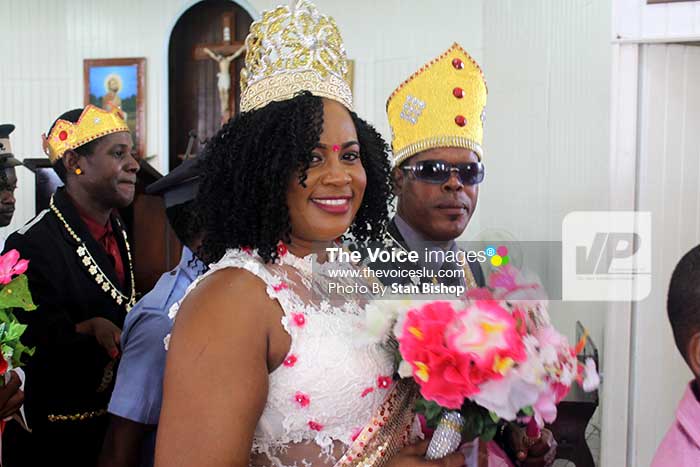 IF it’s August, you can bet your bottom dollar that buzz about the La Rose flower festival would be in the air. Celebrated on August 30 annually, the festival, according to cultural icon, Monsignor Patrick Anthony, “expresses an exhaustive system of mock administration from a royal family to an army, police force, judiciary, health service, education system”.

Numbering thirteen these days – there used to be a far greater number in times past – La Rose groups around the island are well-known for their captivating gwan séances which are precursors to the grand feast day (gwanfèt) held in an appointed community each year.

At those séances, female singers (chantwels) and male singers (chantès) are the focus of attention as they belt out soulful creole lyrics accompanied to a live band often consisting of players on banjo, cuatro, guitar, violin and drums. Much-needed funds are also raised at these séances to finance the upcoming gran fèt.

This year’s gwan séance will be held on Saturday, August 26 from 5:00 p.m. to 10:00 p.m. at the Rodney Bay Strip (between Baywalk and JQ shopping malls). Don’t miss out on the mesmerizing call and response singing and informal group classes in figure and ballroom-type dancing offer (get this – for free!) by those who have mastered the art.

If that doesn’t whet your appetite enough, maybe the mouth-watering traditional eats and drinks on sale might. Would a donbwè la woz (La Rose dumpling) be enough to entice you? A tablet?A glass of golden apple juice?

Everything comes to a climax on Wednesday, August 30 beginning with a church service from 9:30 a.m. at the St. Peter Roman Catholic Church in Dennery. After the service, the ten participating groups (Aux Lyons, Belle Vue (Vieux Fort), Desruisseaux, Grande Riviere, Laborie, Monchy, Soufriere, Dennery, Rainbow Bridge Project and a 20-member-strong visiting group from French Guiana) will take to the streets with their chants, flowers and soulful vibrancy.

They will then assemble at the Clendon Mason Memorial Secondary School tarmac for lunch before making their respective dramatic and vocal presentations in reverence to Rose de Lima, patron saint of the festival.

La Rose (La Woz) is one of Saint Lucia’s two flower festivals, the other being La Marguerite (La Magwit) observed each year on October 17.

The Rose is beckoning all to be part of the celebrations. Will you answer her call?