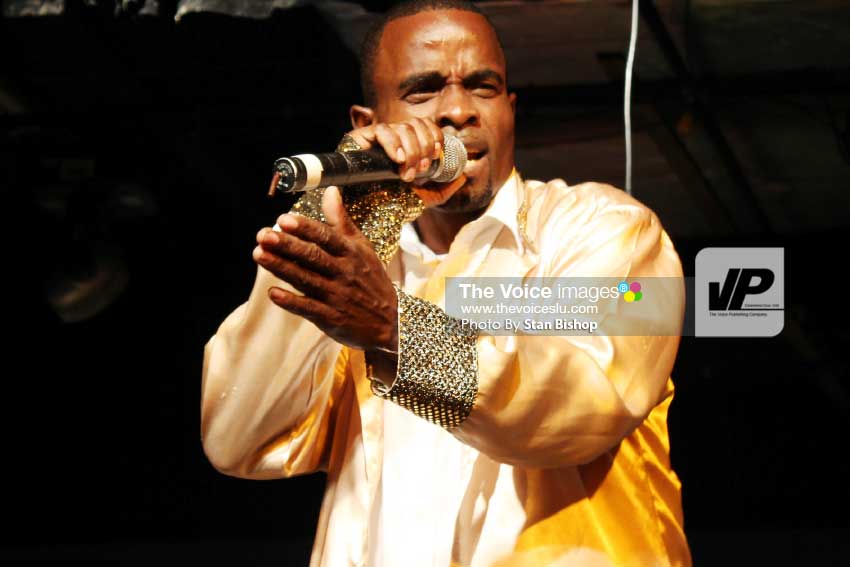 SOUTH Calypso Tent proved last Saturday why more patrons need to come out and support their calypsonians. Indeed, those who did attend the tent’s season opener at the National Cultural Centre (NCC) seemed to be in consensus: that the tent just might retain the calypso monarch its member, Menell, won last year.

Despite Menell not performing on the night, eleven calypsonians performed 21 songs, from many of whom the audience could not resist begging for encores.

In round one, DycerFontelio opened the proceedings with “De New God” followed Dr. G sending the audience into a frenzy with his witty teaser, “Kur”. Newcomer Ginger Snap came out confidently with her message – “Let’s Rebuild Our Nation” – with Crown following her up with “We Freer Than Free”.

Teddy Boy seemed – and at times, sounded – heavenly with his “In The Sky”. But it was newcomer Tino, whose upbeat anthem, “I Will Stand”, that made some in the audience actually stand up with him. Referencing the “I Will Stand” movement that has mounted a campaign against the Desert Star Holdings Limited (DSH) ‘Pearl of the Caribbean’ project for Vieux Fort, Tino’s stage presence mirrored his serious lyrics as he spoke out against the disadvantages of the project.

Hitty shot straight from the hip with “If I Had A Gun”, in which he explained he would shoot down society’s ills, including domestic violence and other crimes against humanity. Next up was Journalist, who informed that he had been hired by a plumber to “Fix The Leaks” in government, following so-called secret government documents trickling their way into the public domain.

The already high momentum picked up more pace and levity with Jn. Charles’ “SéOuMenm Ki La”, a tale about a government minister’s recent, er, sexual indiscretion, that found its way onto social media. As far as Jn. Charles sees it, there’s just no point in denying the obvious.

Newcomer Oshun was undoubtedly the brightest star on the night. In her first outing, she decried the double-speak and double standards as far as the senior generation’s outlook on the youth is concerned. In her song, “Your King Already Reigning”, she chided the judges for encouraging the young to take up the calypso art form seriously albeit the judges while already having foregone conclusions that “their friends” – usually veterans — would get their nod.

Nintus closed off the first round with his emphatic upbeat warning, “Jesus In Jail”, in which he cautioned ‘bad boys’ to not mess with his family or property. Failure to adhere to his warning, he said, would result in him finding Jesus where criminals often admit to finding him. Armed with a long wooden post, it’s safe to say that Nintus’ message was pellucid.

Hitty hit some high notes with an introspective “History”, which begged the question: how will history remember us? Food for thought. The mood switched gears immediately afterwards with Teddy Boy’s “My Famous Guy”, a song in which he claimed said famous guy rose to fame in record time.

As if Jn. Charles had not inflicted enough damage and caused some patrons to laugh uncontrollably, Dr. G just had to rub salt in the wound with “Huge Ball Us”, in which he tapped into double entendre to reveal what he said was the naked truth.

Playing on the theme that we are indeed a dead heroes’ society, Crown’s “Hand Them Their Flowers” was poignant and reflective as he invoked the memories of greats who have passed on, including former De Soca-Lypso Revue tent leader, Gordon “Chacom” Leon, who succumbed to stomach cancer a few months ago.

As DycerFontelio told it, “Honesty Is Overrated”, and that’s the honest truth. However, Journalist failed to capitalize on the second round as he cut short his performance of “Capitalize”, in which he narrated that the present government capitalized on the errors of the previous. The politically-charged song seemingly did not meet some patrons’ expectations and they voiced their opposition.

Ginger Snap made a snappy comeback with “Put Some Oil On It”, the only soca song performed on the night. Although she performed her calypso well in the earlier round, the soca genre definitely fits her natural abilities. In fact, there is already talk that she is a contender for Road March.

After a year in office, calypsonians are already decrying the government putting an end to many programmes and policies, including NICE, and Jn. Charles is the latest in labeling the government. In his song, “Stop Government”, he also had a long list of things government needs to stop doing.

As in her first round, Oshun dazzled in the second with her performance of “The Whip”, in which she said Saint Lucia was in danger of reverting to the slavery era. Clad in tattered clothing reminiscent of plantation ear slaves, she cautioned against citizens becoming complacent, adding that too much was at stake to lose.

Nintus closed the show with yet another “ball” song for the season, this time, “Play You Ball Play”. While the song’s catchy lyrics are already entertaining, it is Nintus’ onstage antics as he played his instrument that really stood out.

With two calypso tents already staging their all-round successful opening shows, it is now left to Ambassadors Calypso Tent this evening to prove that they can keep the kaiso magic alive and strong enough to bring out the huge crowds recorded thus far.