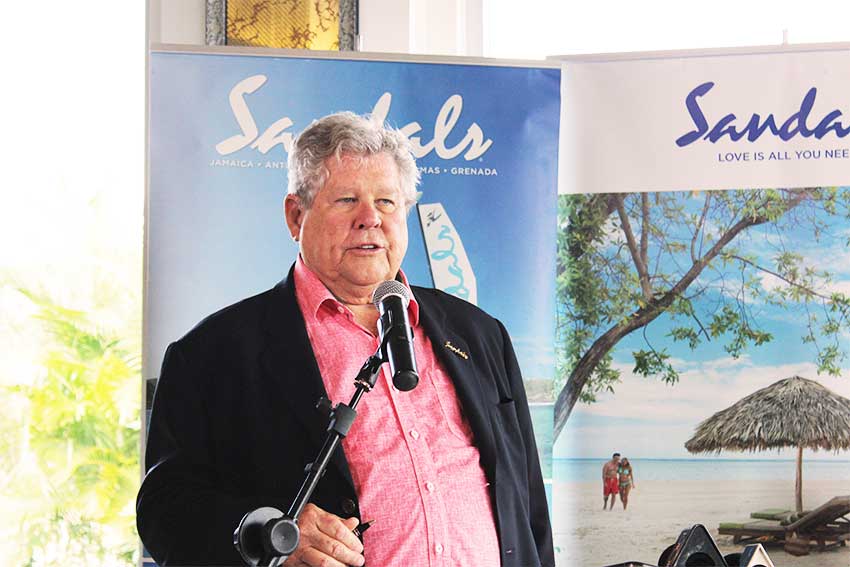 PRESS RELEASE – WHILE Sandals Resorts International has announced two exciting new projects in Saint Lucia, the world’s leading luxury-included chain continues to invest heavily in upgrading the facilities it already has on island.

But even as Sandals expands its offerings on the island, its present facilities are being steadily improved, to the delight of visitors to the island. Earlier this year, a number of exclusive over-the-water bungalows were unveiled at Sandals Grande and the company is currently spending millions in upgrades at its Sandals Halcyon Beach Resort.

General Manager, Christopher Elliott, gave some insight into the improvements during the St. Lucia LaSource news conference held on June 17.

“Over the last year, we have spent close to US$5 million on our rooms, redeveloping our rooms, renovating our rooms at Sandals Halcyon. We’ve added 12 lovely pools in front of our Butler rooms. We’re in the process right now of building River Suites right on the beachfront,” Elliott said.

Elliott said the famous Kelly’s Dockside Restaurant will also be upgraded to the tune of US$400,000, making it one of the most exclusive dining places on the island.

He assured that once the upgrades are completed, Sandals Halcyon Beach will remain the number one boutique resort in the entire Eastern Caribbean.

General Manager of Sandals Grande St. Lucia, Winston Anderson, emphasized that another key area of ongoing development and investment is in the team members at the various resorts, and expects many opportunities to present themselves with the coming of the new St. Lucia LaSource property.

“We’re lucky the Caribbean — and St. Lucia, in particular — happens to have some of the warmest, friendliest people that you can find anywhere, and there are opportunities given to them every single day to develop themselves. A lot of our managers at this resort have started at the ranks and continue to develop. They have been given scholarships and what we’re doing now is preparing them for Sandals LaSource,” said Anderson.

The new resort is expected to be completed in 2019.