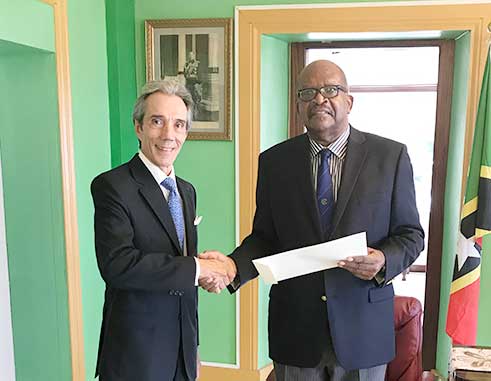 Ambassador Martínez Thomas has served in Argentina’s Ministry of Foreign Affairs since 1974 in a number of capacities within overseas missions and is currently based in Castries, Saint Lucia.

The Ambassador presented credentials to the Governor General, thus changing the jurisdiction of the Federation of Saint Christopher and Nevis from the Embassy in Jamaica to the Embassy in Saint Lucia.

In conversation with His Excellency the Governor General, the Ambassador conveyed the greetings of the Government of the Argentine Republic and expressed deep appreciation for the warm welcome received by the Argentine delegation.

He remarked that the Argentine policy towards the Caribbean has been consistent and steadfast for many decades, and that Argentina stands firm in its willingness to continue in this stead.

The Ambassador expressed the view that the jurisdiction change to the nearby country of Saint Lucia will enable the two countries to work effectively in bilateral and multilateral affairs primarily in South-South projects.