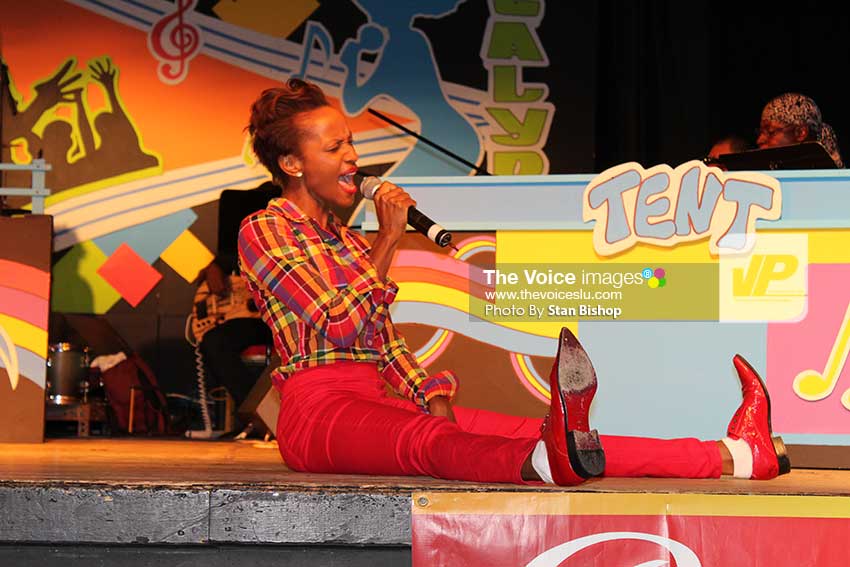 AMBASSADORS Calypso Tent set diplomacy aside momentarily last Thursday evening as calypsonians went for the jugular on a number of key issues on the people’s minds. So serious were the cast members that a few notable officials in key positions in society came in for reprimand.

Nearly a dozen calypsonians took the stage on the night, with Realist opening the first round with his rallying call to “Heal The People”.

Alley Cat followed with her expressive “For The Love of Calypso”, in which she admitted that while she might not become as famous as kaiso greats then and now, her love for the art form was too strong for her to ever leave the kaiso scene.

Robbie engaged in some finger-pointing – snitching, if you prefer — with “Point Them Out”, calling on everyone to name those in society contributing to the myriad of social ills, such as deadbeat fathers, drug dealers, et al.

But Ready took the packed audience at the National Cultural Centre (NCC) back to school with “No Principal”. Playing off the scenario whereby allegations have been made against a school principal, she infused the tantalizing refrain, “They had to combine with that other school/Because the school has no principal.” Aside from the catchy lyrics, Ready employed her wordplay effectively, for instance, it was not difficult to tie in a lack of “principal” with “principle”.

Despite limping on crutches due to a bad leg, Blaze came strong as he asked for a “Better Prime Minister”, explaining the pitfalls politicians should avoid so as to develop into that rare commodity. He offered some simple advice: stick to campaign promises, treat people with equal respect and safeguard the country’s image.

With the night still wide open for a bombshell or two to drop, TC Brown nevertheless advised caution with his “Cover Up”, which took aim at a government minister’s indiscretions surfacing on social media. “If you’re bald, cover up/Don’t leave yourself exposed,” he proffered.

Solange brought things back together after TC Brown left the patrons in stitches as she called on Saint Lucians to bridge “The Great Divide”. Politics, she said, had become so infectious a medicine that people seem incurable from its after-effects, including families tearing each other apart.

The bombshell did hit and Educator actually did two encore performances after patrons could not seem to get enough of his “TiBom”. Referencing an incident earlier exposed by TC Brown, Educator’s crowd-pleaser about the minister’s private business becoming fodder for discussion in the public domain created quite a stir. As he tells it, the minister’s portfolio should be expanded since he seemed to have a great deal of spare time on his hands.

Jackson is back – and getting even better. The former monarch made a splash with his upbeat “J’Ouvert Bacchanal” to close out the first round. The bouncy track relates Jackson’s rendezvous with a female reveller who becomes his love interest – if only to jump and whine.

The second round featured Ashanti making his first appearance on the night with “Back To The Ghetto”, a song that speaks to the dichotomous nature of education: placing an employees on people getting one but for whom job opportunities are bleak having been qualified.

With Take Over Tent and South Calypso Tent having set the standard earlier, Ambassadors nevertheless was impressive in their first outing. However, things are expected to improve for the three tents as they prepare for their respective quarterfinals.

Ambassadors will host their quarterfinal round on Wednesday, June 21, Take Over Tent on Thursday, June 22 and South Calypso Tent on Saturday, June 24.