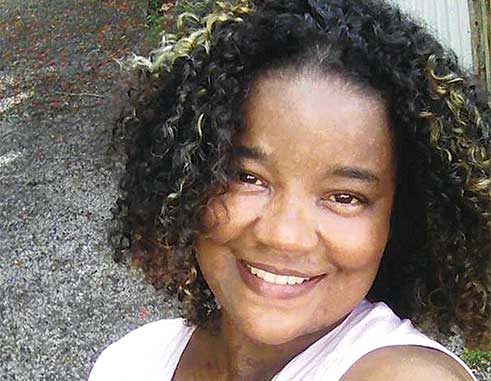 Today’s WOTW brings the term “Shero” to a whole new level because she is literally a warrior who has been fighting throughout her entire life.

Olivia Cadet is a beautiful Castries girl inside and out with a smile that will leave you both envious and warm (because this woman has cheeks that other people pay to have). The 32-year-old also has a knack for making people laugh with her jovial and chirpy sense of humour and infectious personality.

Cadet considers herself a real people’s person and said she lives by the belief that laughter really is the best therapy for the soul and is passionate about helping others who feel down and out in whatever way she can.

It would be easy for one to think that Cadet is perfect in every sense and, in a way, she is, but she is imperfectly perfect. The single mother has struggled with a severe form of the skin condition, eczema, and has literally had to fight some unimaginable battles her whole life to overcome the effects of it — from mental to physical.

Cadet said: “I was born with beautiful skin. Actually, it was so beautiful and clear that people actually use to stop my mom and comment on it, touch it etc. When I started going to preschool, I believe, or even before that when solid foods were introduced, I began showing symptoms of atopic dermatitis (a type of eczema). Initially, my parents attempted to treat the condition by eliminating foods which triggered my allergies and caused me to scratch my skin. But this proved difficult as I am allergic to almost everything.

She continued: “By the age of 10, when the eczema had spread to all of my arms and legs, the doctors decided to put me on the drug, prednisone. Essentially, this medication suppresses the immune system, so when on it, I am able to consume the foods and use the products that I am allergic to without getting a physical reaction on my skin. It would basically block the external reaction but not cure the ailment itself. I have been on and off the prednisone my entire life.”

Cadet explained that after years of receiving treatment for her condition, it has had numerous adverse effects on her.

She said: “Psychologically, the skin condition has taken quite a toll. I believe that living in St. Lucia has made it even more of a cross to bear as our culture is one in which people are known to be unable to mind their own business. So not only have I had to deal with daily stares, but also with the insults, name calling (moreso as a child) and those who seem to want to help by suggesting remedies but who would first attempt to comment on my skin in a very hurtful manner.”

Cadet said that while she has strived to educate the masses about her eczema and the effects it has on her in every aspect of her life, she also goes the extra step to speak on the psychological effects of the condition, with hopes that people can understand her and people like her better.

When asked where she gets her drive and strength from, Cadet said: “To be honest, my strength has come from God and the human angels He has given me in the form of friends all over the world and, most of all, my family, especially my daughter. I am driven to educate and spread awareness of mental illness, eczema and any other physical condition which makes people “different”, because I believe our society has ignored this important aspect of our human resource.

She added: “I believe that life would be better, and our society would be more prosperous, if we paid more attention to the health of the people –not just the cancers, diabetes, high blood pressure, etc., but those ailments which are considered unimportant or not important enough to invest money in to help those suffering from them. We are lacking greatly in that area and a lot of the violent incidents that occur on the island are a direct reflection of this. Things will only get worse if something isn’t done. But nothing will be done unless the voices of those who have been there are heard and heard with respect, empathy, love and consideration.”

Cadet grew emotional while speaking about the treatment she has received from the general public over the years, an issue which she said is important to point out, especially on the contrast between the way she is treated when the eczema has flared up and when it has cleared.

She recounted one of her worst encounters: “My worst experience happened this year after my mom’s shop closed down in February. I was told by the H.R. Manager of an establishment to come in with my resume to arrange an interview. I entered the said establishment (one in which I had previously worked) and the young lady at the front desk immediately (as she always does) started to throw a barrage of questions at me concerning the state of my skin. The interesting thing to note about that day was that at that time, my skin had cleared up tremendously compared to the last time the young lady had seen me; so much so that many people had thrown compliments my way throughout that day.

She went on: “I walked into the building feeling confident, great and so happy that I looked good and healthier and better than the last time I worked there. Then came the negative forces in the shape of this woman who drove me to the brink of tears with ten minutes of questioning about the skin on every part of my body. ‘Oh, my God, look at your fingers. Look at what it has done to your face!” This was just to quote a little bit of what she said to me. Being the nice person I am, I kept trying to point out to her that I was significantly better than when she last saw me, but she wouldn’t hear me, she wouldn’t stop, she kept going. In a fake state of shock over my skin, she kept questioning me until I decided to just hand her the resume and walk out of the building to cry outside. It was terrible and it completely broke me. I stopped applying for new jobs at that point and had to take a break to collect myself and rebuild my self-esteem.”

Nevertheless, Cadet said she has had numerous great experiences, especially on Facebook, where the flow of support from friends and family is never-ending.

She said: “I love Facebook and I am grateful to Mark for creating it. It has given me access to a support system filled with amazing, intelligent, caring, loving and wise men and women in St Lucia and across the globe.”

Cadet said although in the past she has hated the condition, with the lessons that she has learnt along the way, mainly that true love isn’t about the physical, she wouldn’t trade it.

She said: “A man who has liked me since the age of 16 when my eczema wasn’t as bad as it has been of late recently told me that he used to see me all those times I tried to run through the neighbourhood with my long sleeves, long pants and big shades. He said that he saw me all those times and would always say ‘hi’ and try to stop me to speak to me, but he would see me put my head down and quickly walk away.”

She continued: “He confessed that he still liked me and was still very much attracted to me in those times when I was at my worst. He loved me even though he looked pass my shades and saw my puffy eyelids, fallen eyelashes and eyebrows and all my scars. I felt amazing when he told me all this a few days ago. He told me that he saw me during my best times and worst times and that he always felt the same because he always saw my soul which has been consistently beautiful.”

Cadet also revealed her WOTW secret: “I love Victoria Hospital! People have not given the staff of V.H. the credit, recognition, praise or thanks they deserve. I would like to say a special thank you to Dr.Felicien and Dr. Emmanuel for their help during my stress-induced emergency. They spent time with me, they listened and they showed concern and love, and in the end, helped me to find a solution and gave me the direction I needed. I love V.H. and the staff and I would not be okay today if it hadn’t been for them.”