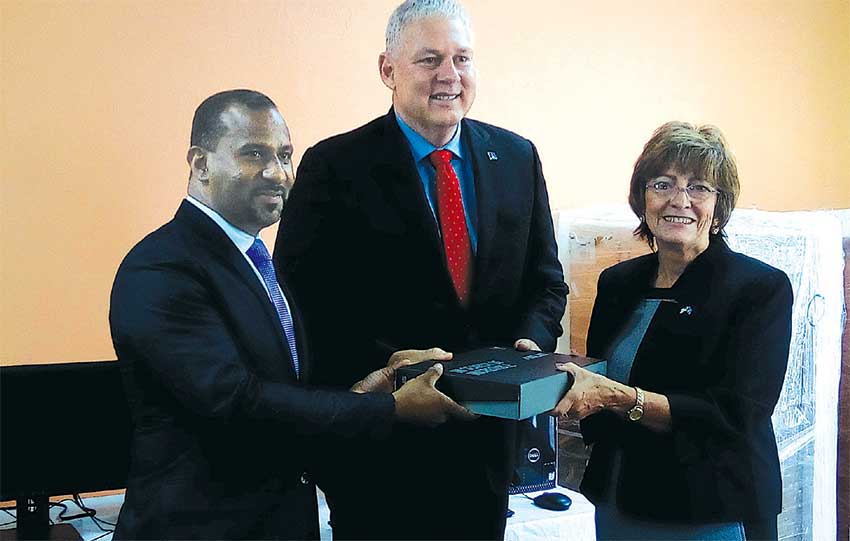 THE productivity of the Crown Prosecutions Office which has been adversely affected over the years by severe resource limitations, is expected to improve with a donation of laptops, desktops, filing cabinets, printers, shredders and scanners from the American Embassy in Barbados.

Daarsrean Greene, the Director of Public Prosecution, drew the correlation at the handing over ceremony Thursday, stating that justice was suffering at a really great extent due to a lack of resources.

“In coming into office, I recognized immediately that we really needed this sort of investment,” Greene said, describing the donation to his office as a “most generous package.”

“This donation will greatly improve the capacity of the Crown Prosecution Service where we affirm our overall mandate, which is to implement the comprehensive quality framework that would enable the department to address crime in a coordinated, expeditious and focused manner,” Greene said.

According to him, the donation will enable his office to effectively respond to the reasonable judicial expectations, meaning the deadlines provided by the courts that his office has to meet to effectively perform its duties.

But the Director, while pleased with the donation of office equipment, pointed to a home for the court as being of a necessity at this time.

Greene, who was appointed in October of last year for a one year stint, has received a nod of appreciation by the United States government for his efforts so far.

“Mr. Greene deserves our collective support to ensure that law and order prevails in St. Lucia. This equipment represents a vote of confidence by the government of the United States for his good efforts,” said United States Ambassador to Barbados and the eastern Caribbean Linda Taglialatela, who handed over the equipment.

She said her government is committed to supporting Prime Minister Chastanet’s efforts to strengthen the rule of law in St. Lucia and looked forward to continuing the relationship and partnership it has with St. Lucia and to making the country stronger, safer and more prosperous.