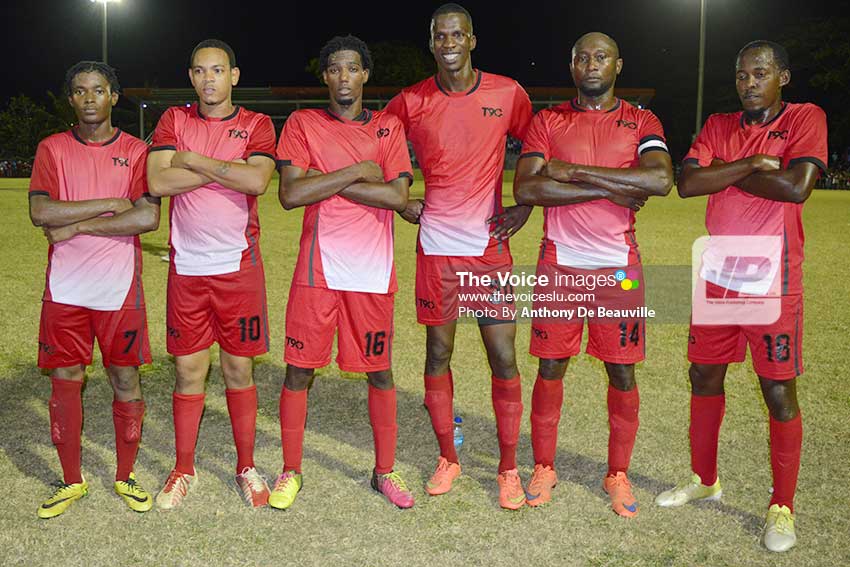 AFTER four days of excitement and 17 goals scored in seven matches, the Vizions Entertainment ‘Super League’ Football tournament takes a break for the Easter celebration and will resume on Tuesday at the La Ressource Playing field with a double-header when from 6:00 p.m. Marchand play Dennery and Mabouya Valley take on Micoud at 8:00 p.m.

In matches played on Wednesday, the National Under-21 team was again a class act on the playing surface following their hard-fought 1-1 draw against a formidable Canaries team in a match played in Soufriere last Sunday. On Wednesday evening, they switched into high gear as they defeated Vieux Fort North 1-0, a goal scored by Erickson Reid Magloire in the 35th minute.

The second match of the night featured home team and tournament favourites Vieux Fort South asking La Clery in a highly-anticipated encounter. By the time the referee had blown the first whistle, the Phillip Marcellin Ground was ablaze with a crowd of just over 1,000 fans.

Vieux Fort South looked to continue their winning ways as they did in their first game against Gros Islet (1-0). La Clery, too, looked up to the task. However, VFS seized the opportunity by going ahead in the 31st minute with a left foot strike by Antonious Myers and that was the score at the end of the first half.

The La Clery team remained focused despite their midfielders and strikers being made to work hard by VFS. Jervis Mc Farlane and Jamil Joseph were both issued yellow cards.

On the resumption, La Clery’s determination paid off in the 64th minute when Travis St. Pierre got his team an equalizer with his lobbying right foot strike eluding VFS goalkeeper Leon Alexander.

Meanwhile, on Tuesday evening in the first of a double-header, Marchand drubbed South Castries 7-0. Andrus Remy opened the scoring for Marchand in the 10th minute; South Castries in return gave it their all only to be robbed by the woodwork in the 27th minute of play from a shot taken by one of their players.

From there on, it was all Marchand as it was a one-way traffic: Valdez Maximin made it 2-0 in the 38th minute, while two quick strikes from the boots of Andrus Remy in the 40th minute — his second on the night — and Jarvis Joseph in the 42nd minute respectively, gave them the advantage at the half-time whistle.

On the resumption, Marchand switched into high gear. Ferguson St. Clair increased the lead to 5-0 with a 55th goal minute, substitute Lincoln Phillip made it 6-0 in the 64th minute while Ahmed Chandler scored in the 3 minutes into added time.

Billed as the “East Coast Derby”, home team Mabouya Valley came up against neighbours and archrivalsDennery. With a crowd of over 3,000 fans, this highly-anticipated contest surpassed all expectations.

Mabouya Valley gave nothing to chance in a game that would go down to the wire. Their prolific goal scorer Vernon Abbott opened the scoring in the 39th minute which had the Valley fans on their feet.

On the resumption, both teams went at each other but with constant pressure coming from the Dennery attackers, their perseverance finally paid off as they were awarded with a questionable free kick just inches from the dreaded penalty spot in the 66th minute.

Ridel Stanislaus’ left foot shot eluded the five-man wall and the goalkeeper to put his team back in business.