THE legacy of St. Lucia-born war hero, Jean Baptiste Bideau, is continuing to thrive while securing a strong bond with Venezuela 200 years after his death.

Yesterday marked the bicentenary of Bideau’s death and the occasion was commemorated with a wreath-laying ceremony at the site of his bust Bideau Park in Castries.

Although the event got off to an hour-late start, it was well attended by family members of the late Bideau, as well as members of government, Castries Mayor Peterson Francis, Governor General Dame PearletteLouisy and members of the Embassy of the Bolivarian Republic of Venezuela in St. Lucia.

Bideau is famously revered by both the St. Lucians and especially the Venezuelans, the latter being where he fought for and sacrificed his life to secure their freedom and independence from the Spanish colonies.

Joanna Andrew, a descendant of the war hero, addressed the guests with a moving and inspiring speech about the legacy of her ancestor.

Andrew said: “Is Jean Baptiste Bideau a war hero? Undoubtedly! We can clearly see the scale of heroism and sacrifice. Today, 200 years later, we continue to celebrate this man who has and still will serve as an inspiration, not only to me but to generations that have come and will be. Bideau has changed the lives of millions today. His legacy has taught me the importance of selflessness and bravery, and showed me the value and pride in upholding principles. He overpowered the powers that be, and with the vision for a better future, fought for the freedom of others. We as the descendants of Jean Baptiste Bideau believe that for revolution to be irreversible, it must be cultural; therefore, it is our responsibility to revise his history and the great legacy he has left.” 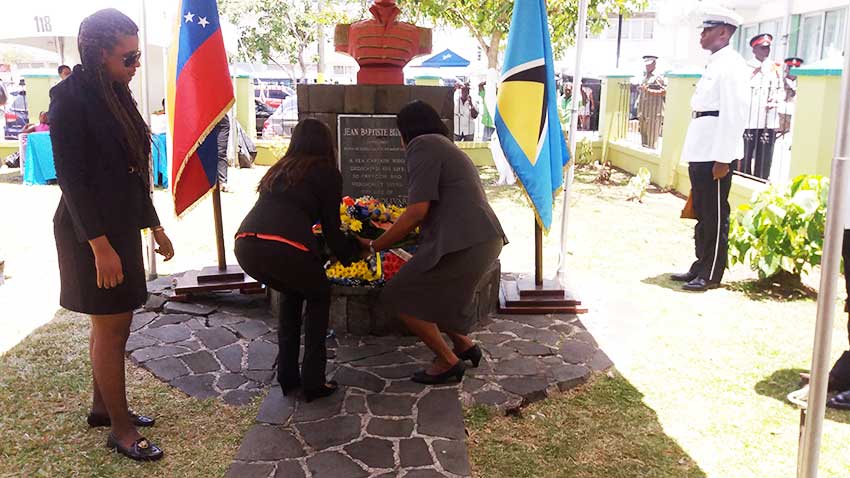 Andrew urged the two nations to follow in Bideau’s footsteps and uphold the values that he fought and died for.

She said: “The Bideau family, the Venezuelans and the people of St. Lucia must learn and exert the same selflessness, bravery and principle that Jean Baptiste Bideau stood for through the activities to continue to bring freedom, hope and help to others. He has lent the freedom we now have and has made us very proud. Let us do the same and grant him freedom and make him proud. Today, let us bestow posthumous national hero (honour) upon this great man Jean Baptiste Bideau who fought for us all. As the saying goes, ‘If you don’t stand for something, you will fall for anything.’ Let us always stand for freedom and justice.”