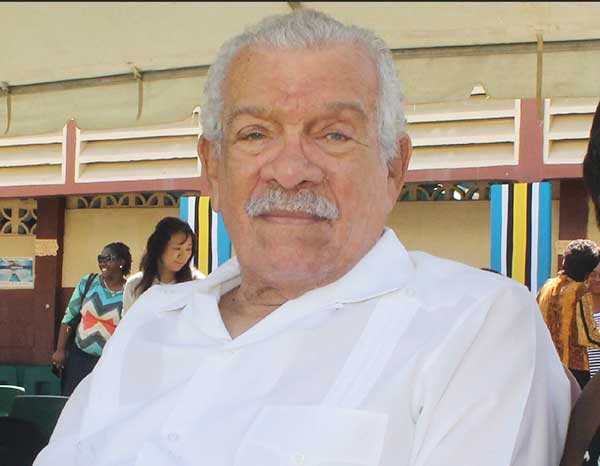 THE Caribbean Community (CARICOM) has described the late Nobel Laureate, Sir Derek Walcott, as a “quintessential Caribbean writer” as the region continued to pay tribute to the St. Lucian cultural icon who died on Friday at age 87.

CARICOM Secretary General Irwin laRocque said that Sir Derek, a prolific and accomplished writer who received the Nobel Prize for Literature in 1992, “has left a void in the tapestry of Caribbean literature and theatre, after more than seven decades of producing inspiring literary works in essays, poetry and plays”.

He said that Sir Derek, who was among the first recipients of the Community’s highest award, the Order of the Caribbean Community (OCC) in 1992, was also highly decorated with national and international honours.

“To the Caribbean Community, Walcott was a true Cultural Icon, a gift from St Lucia to the region and the world. He embraced the entire Caribbean as his own. His lyrical poetry and penetrative plays resounded with the rhythm and spirit of the Caribbean civilization.”

Walcott is perhaps most celebrated for his epic poem, Omeros (1990), which received widespread global acclaim and has also left “an enduring legacy in theatre by founding the Trinidad Theatre Workshop in 1959 and the Boston Playwright’s Theatre in 1981.

“The Caribbean Community wishes to express sincere condolences to the family of Sir Derek Walcott, the Government and People of Saint Lucia and the artistic community of the Caribbean on the tremendous loss of a gifted and inspiring Caribbean writer. We salute this distinguished son of our region, whose presence in our midst will be greatly missed,” LaRocque added.

The University of the West Indies (UWI) in extending condolences to Walcott’s family recalled that on his 80th birthday, the university honoured him through a showcase of his art and literature in an academic conference, “Interlocking Basins of a Globe”.

This included an exhibition of the Walcott family’s private collection of his paintings and a performance of “Fragments”, a play celebrating his literary works.

Trinidad and Tobago’s Prime Minister Dr. Keith Rowley noted that “Walcott was a prolific writer whose creative works were strongly influenced by Caribbean culture and who also sought to share the West Indian experience with the world.

“ I am deeply saddened by his passing but I am certain that his work, teachings and scholarship will continue to influence a new generation of theatre professionals, writers and poets.”

The Bahamas government said “this luminary of the Caribbean will be sorely missed and we thank him immensely for the rich body of work he has left with us”.

Chairman of the OECS Authority, Prime Minister Dr. Timothy Harris of St. Kitts and Nevis said the Nobel Prize in Literature 1992 was awarded to Sir Derek Walcott “for a poetic oeuvre of great luminosity, sustained by a historical vision, the outcome of a multicultural commitment.”

Harris said Sir Derek’s poetry was a reflection of his deep commitment to his country and the Caribbean, as it masterfully captured the physical beauty of his milieu. It was this idyllic social environment that he gravitated towards throughout his life, choosing to spend much of his time in his homeland St. Lucia.

He added: “For the celebrations marking his 80th birthday on Saturday, January 23rd, 2010, Sir Derek Walcott invited other literary giants such as the late Irish poet Seamus Heaney and the African playwright Wole Soyinka to St. Lucia, where no doubt the sea played a starring role in the festivities”.

Harris recalled that Sir Derek told The Economist in 1990 that, “the sea is always present. It’s always visible. All the roads lead to it. I consider the sound of the sea to be part of my body. And if you say in patois, ‘The boats are coming back,’ the beat of that line, its metrical space, has to do with the sound and rhythm of the sea itself.”

He concluded: “Today, the Caribbean and indeed the world grieve the passing of Sir Derek Alton Walcott, KCSL OBE OCC, whose soul will forever live on through his body of award-winning literary works. May he rest in eternal peace.”

Former Commonwealth Secretary General Sir Shridath Ramphal noted that in his epic work, Omeros, Walcott wrote of “ a quiet culture that…slowly but sure,… will change us with the fluent sculpture of Time”. – “strong as self-healing coral.“

Ramphal said Walcott was “the quintessence of that Caribbean culture and his life’s work has surely changed our region for all time. He came to belong to the wider world; but we shall miss him most. St. Lucia, who made us proud in molding him will, of course, miss him most of all. We must rely now on that quiet culture his genius left us – and further it.”
The Lucian People’s Movement leader Therold Prudent saluted Walcott for his “enormous contribution to our nation”.

He added: “For It was the power of his inspirational writing skills and his efforts to preserve our culture and way of life that propelled him unto the world stage, and with his fame came a complete recognition that not even the declaration of Saint Lucia’s independence in 1979 could have achieved.

“His fight for the preservation of the Pitons as a World Heritage Site, among other natural sites throughout the island of Saint Lucia, cannot be dismissed. For as equally as he told the stories of St Lucia through his work in literature, his indelible mark as an environmental activist gained even greater prominence.

“And so, as we join together in this moment of sadness to pay homage to our national hero Derek Walcott, let’s not only honour his memory in literature but in one of the most significant areas that he would have approved.

“Therefore, the time has come to speak in one voice. Tell your government that the only way to honour and respect the legacy of Derek Walcott’s contribution to our country is to abandon its ill-conceived plan to destroy the sanctity of Maria Islands and its natural habitat among other sites”