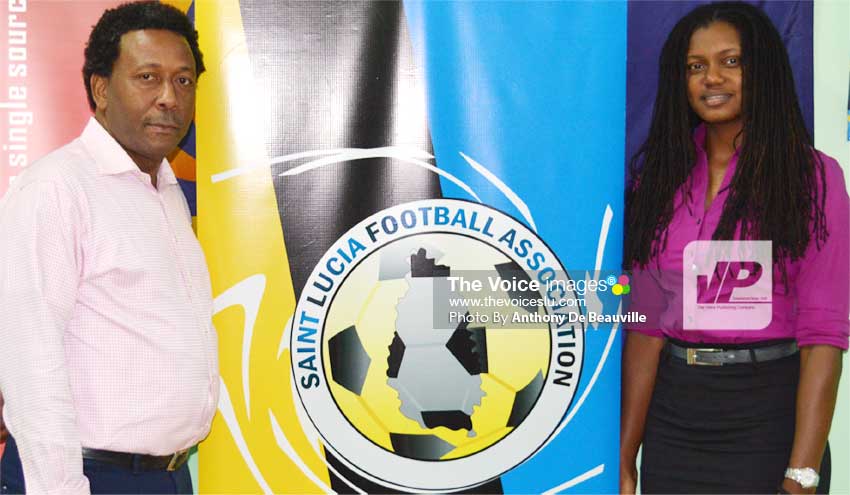 The action kicks off on Sunday, April 2 with an opening ceremony at the Grande Riviere playing field (Gros Islet) with other matches to be played at the Corinth playing field.

Huanna Leon, Business Development Officer for Guardsman Saint Lucia Limited, said the company was proud to be sponsoring the tournament.

“We are interested in securing the future of football here in Saint Lucia,” she said. “We are here to work together with the Saint Lucia Football Association to accomplish the goal of developing the sport of football among our youth. We at Guardsman count it a privilege to be associated with this tournament, and we intend to remain as partners with the SLFA for the foreseeable future.”

As was the case last year, Guardsman also made a financial contribution towards this year’s tournament. Leon said that upon the conclusion of last year’s tournament, the company was impressed with the level of skill and discipline displayed by the youngsters.

SLFA President, Lyndon Cooper, said the SLFA expects this year’s tournament to be bigger and better, especially with increased sponsorship and participation.

“We are now doing it at the Under-13 level rather than Under-14. All this is part of the SLFA’s developmental plan to ensure that we make football the number one choice of sport. We want 50 percent of all our children playing football by the year 2020,” he said.

With the question of playing sport on Saturdays and the recent call for a boycott the Inter- Secondary Schools Sports that was slated for Saturday, Cooper said, “As we have indicated, football is an all-inclusive sport; it is not a sport based on religious beliefs, gender or sex. We have always maintained that we are going to allow every individual to make their choice. We also recognize that everybody has a right to worship on whatever day they choose, so we basically are not even going to attempt to discriminate.”