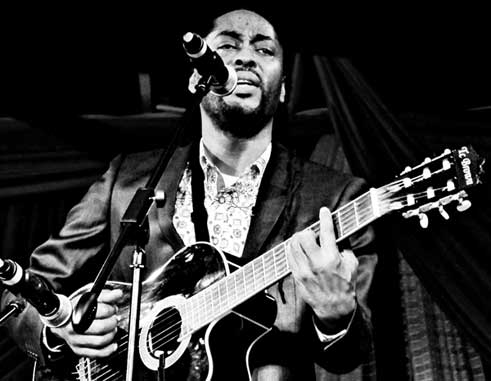 SOME years ago, musician TC Brown struck a conscious nerve with many when he lamented in song that time soon becomes the fateful factor that makes us forget the contributions made by our forebears. In the song, “Where Are They Now?”, the singer forced us to appreciate what we had and not abandon what probably would have been the best gifts to ever come from among us.

Today, the Bishop’s Gap resident finds himself on the receiving end of tributes as his story gets told while he’s still around to continue raising our consciousness with the lyrical talents he graces us with every time his deep voice speaks words into a microphone and he strums a few chords on his guitar.

The musician, whose real name is Linus Terry Cadette, was born and raised in Bagatelle, Castries. His introduction to music came around age 4 or 5 when he began making drum sets and noise with his mother Rose’s pots, pans, buckets and whatever else he could get his hands on.

“I’ve always searched for that sound that came close to a drum set, so I experimented a lot,” he said, before breaking into a slurred four seconds of laughter.

After leaving the St. Aloysius R.C. Boys’ School, Cadette joined the junior choir at the Minor Basilica of the Immaculate Conception after an invitation was sent out for new members. While there, he learned to sing in key and play musical instruments, including perfecting his skills on the drum set and taking up the guitar.

Buoyed by his growing interest in music, Cadette enrolled at the St. Lucia School of Music where he pursued courses in music theory and classical guitar playing for some time before doing an eight-year-long stint on cruise ships where he performed with the band, Summit.

After returning to Saint Lucia from England in the mid-1990s, Cadette entered the competitive calypso arena in 1999 around the time he joined the band, October 4. Despite a valiant effort at capturing the monarchy, he failed to make it to the final.

“It was a tough year and there was a lot I needed to know at the time but didn’t quite understand,” Cadette admitted. “I mean, many people thought I would have made it through and I did, too. It was a shocker, really. However, since then I’ve been able to make it through to the finals in the years I competed.”

In 2001, Cadette won his first and only calypso monarch with “Rise and Shine” and “I Like”, teaming up with Solange Stanislas on the latter track. The win, he said, was met with some controversy, including the fact that he was not the season favourite. However, the win was a monumental moment that signified that he was a musical force to be reckoned with.

“My team and I were ecstatic because we had done what we were supposed to do that night and did so in grand style, too. I really enjoyed that win and was pleased that the judges liked my performances,” Cadette explained.

Cadette has also participated in the Groovy and Party Soca Monarch on a few occasions, proving that even a serious calypsonian can let loose to a certain extent to push a positive message.

Having made quite a name for himself musically, Cadette took a break from competitive calypso about three years ago to focus on his career. He never missed a calypso tent, though. The hiatus, he said, was needed so as to become more of an observer than a competitor. It turns out that the break was also therapeutic on many levels with his music becoming more serious and conscious.

“The break allowed me to go through a personal, spiritual and musical growth,” the musician stated. “I now view things differently than I would have previously and try to make that reflect in my music. My days of singing ‘slackness’ and about drinking rum and stumbling down are over because I’m no longer like that. Right now, I want to do music to which I can relate personally.”

Over the span of his musical career, Cadette has drawn on the strengths of a few songwriters who have penned him some of his brightest gems. The list includes Zephrinus “Face” Calixte, Jeff “Pelay” Elva, Gregory “Shining” Emmanuel and Teddy Zee.

“In most of my music, I’m involved in some way. I would often start a new creation by penning the idea and first verse or chorus before taking the material to more seasoned songwriters.”

At 46, Cadette has spent the past four decades trying to create his own musical vibe that has seen him sailing across the world and back to winning a title that many musicians have on their wish list. Not satisfied with that, you can also hear his voice on The Wave radio station where he has been a radio announcer for quite some time. He described being an artiste and radio announcer as enjoying the best of both worlds since he gets to be surrounded by music daily.

“Over the years, I’ve learned to be grateful that I can do both and be around music and blend the two. Rather than letting my two jobs compete, I try to blend them by creating that TC Brown show,” Cadette said.

The name TC Brown evokes nothing more – or less – than the creature of music who seems to purposefully remind us of our duty to appreciate the basic things in life such as respect, humanity, love. This year, however, his calypso, “Eye of the Storm”, forced us to take a second look at the effects of climate change. While he did not place in the final of the Calypso Monarch, he said he felt righteous that the message was communicated.

“I’m just thankful that I can continue to do music. I’m also excited about the way I’m viewing music and understanding myself as a spiritual being. So I think some good things will be coming from me in the coming years. I want to do positive music that people can connect with, music that elevates,” Cadette explained.