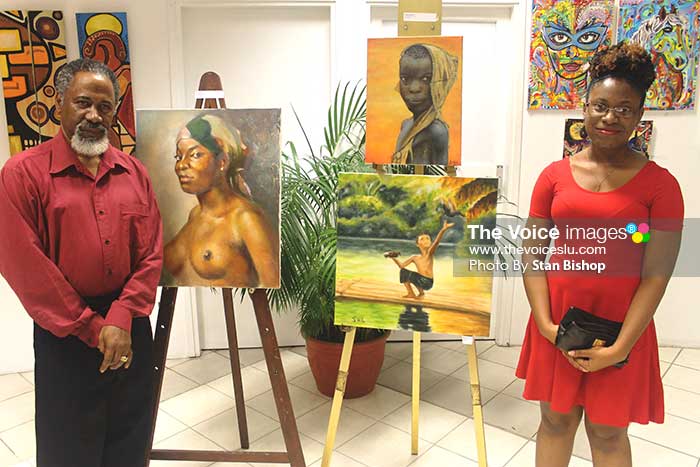 Famous Spanish painter Pablo Picasso (1881-1973) is known the world over for his extensive contribution to the world of art, including co-founding the Cubist movement, inventing construction sculpture and co-inventing the collage. He is also famously known for coining the phrase, “Every child is an artist. The problem is how we remain an artist once we grow up.”

Twenty-one-year-old Solange Lawrence says she’s doing all in her power to make every brushstroke paint a bold statement about her passion for art and an inspiration to others. Simply put, she said, her art is redefining the way she sees the world.

The daughter of renowned Saint Lucian artist, Ken Lawrence, said that while she would have been surrounded by her father’s paintings and creative energy for years, she was never really forced into following his footsteps as a girl.

She said her father’s interest in her getting into art was a periodic thing as time. After she graduated from “A” Level, however, he encouraged her to take up the skill seriously so that she could have a trade of her own.

“On his advice, I joined an art class where we all drew something from nothing,” Solange said. “We started off using charcoal, then oils. After painting and drawing different things using different forms, I just fell right into it.”

While she admits to seeking her father’s counsel at times, such as how to mix paints, Solange said she prefers to work things out for herself first. Art influences art and, jokingly, she borrows a line from someone who must have been as passionate as she is about art.

“Like the saying goes, ‘You need two people to help you paint: one to paint the picture and the other to tell you to stop,’” Solange explained.

Solange has been painting for a little over a year now and currently specializes in oils. Before oils, however, she did a lot of paintings in coloured pencils. Painting with oils, she said, “makes you makes you see things differently.”

“I enjoy painting. At first, it was more of a hobby. My father eventually told me that he needed me to start drawing. We made that deal that I would and I eventually did,” the young artist said.

Solange is currently employed at a day job and paints mostly at nights, spending hours in her studio painting her creations she hopes would morph into masterpieces. She also hopes that her works of art become her principal source of income.

As did her father, Solange participated in Artist Circle’s first exhibition which ran from December 5 through 19 at the Alliance Francaise. Teaming up with her father, she said, was inspiring. Being asked to sign autographs made the experience even more special, she quipped. She believes more people need to either get into art or embrace art and artists, emphasizing that the former is an even more satisfying choice.