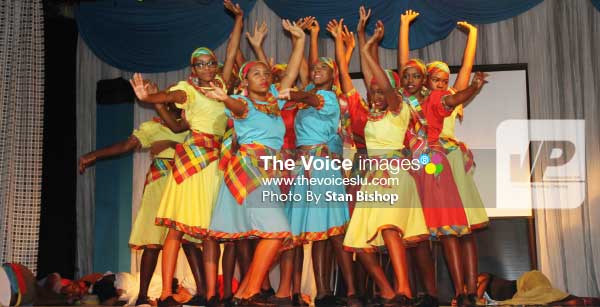 FOR the past 25 years, Silver Shadow Performing Arts Academy has been known for raising the bar as far as dance is concerned. Many of its dancers have become household names and their dance moves continue to dazzle and inspire. But to get to where the company is presently, one needs to take a few steps backwards.

The story begins 30 years ago with a 13-year-old boy named Barry George who was determined to make a name for himself after taking up dance when he entered Entrepot Secondary School. George said he was fortunate to be among a classroom of talented people: singers, dancers, painters, writers.

“They’re the ones who inspired me. However, what was unique about the situation for me was that I had a particular quality that none of them had which was demonstrating leadership and being able to mobilize and put things together,” George explained.

George said he was able to harness the students’ talents and before long they were the ones representing the school in dance and choir. In short, they were the ones organizing everything that had an entertainment element at the school. He singled out the head teacher who encouraged him to take his talents further.

“I had a very good principal, Mr. Albert Nathaniel, who really encouraged me,” George, 43, said. “For instance, whenever the Department of Culture organized dance training for teachers, he would send me even though I was a student. So that opened up many opportunities for me.”

George led the school’s dance company from the time he was in Form Two right until he graduated from Form Five in 1991. Recognizing that there would be a void when George left, his fellow students encouraged him to continue what he had started. He did so by forming Silver Shadow Performing Arts Academy that same year.

“At the time, I had no direction as far as what to do,” George confessed. “All I was concentrated on was that there was an avenue where young people can come together and express themselves. As the journey continued, we were able to evolve into who we are today.”

To improve on his A-game, George said he studied the techniques of the existing dance companies at the time, such as Charmalion Dancers, Les Enfants Dance Troupe and Christylites Dance Academy, all successful dance units at the time.

Today, George serves as founder and artistic director of Silver Shadow Performing Arts Academy where the focus is on dance education and theatre arts. He said the journey has been a challenging but rewarding one. Achieving an unmatchable standard, he said, remains key to the company’s philosophy.

“I had this vision of taking dancing and entertainment in general to its highest level. My biggest challenge was operating from Saint Lucia because I don’t think Saint Lucia is ready for a group like ours. I think we are stifled a lot because we don’t have the appropriate facilities. For instance, a major production cannot even be held at the National Cultural Centre because that venue’s layout is very limiting and restricting,” the Morne Fortune resident said.

Limited space or not, George said he nevertheless impresses upon his dancers to rise to the challenges and deliver a high quality performance that ranks on par with the world’s best. However, he believes that as good as the dance company is, there is still much more it can do had circumstances been better.

George said he remains proud about the strong influence the dance company has made on those who gracefully danced through the blood, sweat and years of the company’s life. He said the milestone all comes down to the impact that was made over those years.

“I mean, I’ve been able to save many people’s lives. Many people came to Silver Shadow distressed and used dance as a way of doing amazing things. Right now, many students doing dance as a CXC subject are members of Silver Shadow,” George explained.

The dance troupe has also performed overseas, including in Suriname, Guyana, Trinidad and Tobago, Grenada, St. Vincent and the Grenadines, Martinique and Guadeloupe. Recently, some members travelled to Chicago, Illinois for a trade expo with officials from the Saint Lucia Tourist Board.

“We’ve been doing a lot. But if you asked me, we’re not doing enough. We’re bored because while I’m inspiring between 50 to 60 students, there is nothing in the national calendar of activities that specifically targets dance unless we create them ourselves. Apart from dancers being very busy around carnival time, there’s hardly any festival for them,” George lamented.

George said the dance art form is suffering badly because the curriculum rarely offers dance children between 5 and 12 years, leading to a loss of interest. Nevertheless, George said Silver Shadow endeavours to change that anomaly despite running into a myriad of challenges, including inadequate venue space.

George has worked closely with the National Youth Council (NYC) from 1995 to 2009. In terms of youth development, he has contributed immensely to pageantry by assisting contestants participating in pageants such as Teen Talent, Miss Independence and National Carnival Queen Pageant. His dancers also feature prominently during the carnival season as back-up dancers to some of the island’s top soca artistes.

In 2015, George was awarded the Saint Lucia Medal of Merit (Silver) for his contribution to culture and the performing arts. He said he considers the medal a major achievement.
Going forward, the dance company is already making plans to have its permanent home. Networking with government ministries and regional and international dance companies in an effort to get certification is also in the mix. George believes that should these goals be achieved, the dance art form would become a more diversified and much-sought-after product.

“We believe in the Saint Lucian dance product. I mean, for the few times that I’ve performed overseas, I’ve seen Saint Lucian dancers do some amazing things to move audiences that more people in the world need to experience. So we want to showcase more of that,” George explained.