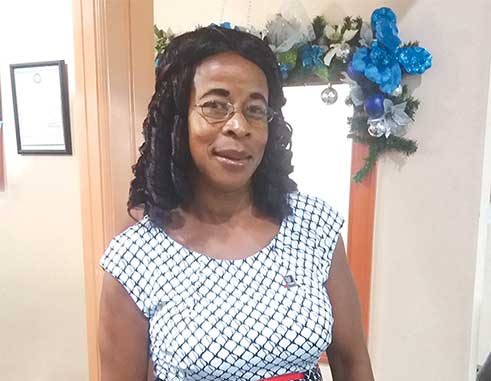 THERE are many difficult jobs in this world, and the list is seemingly never-ending; however, I think it is inarguable to say that looking after tiny tots is one of the toughest jobs there is.

Today’s FITC, Ruby Baptiste is the Administrator of the Ciceron Daycare Centre and has been for just over one year; however, she almost let fear stop her from grabbing the opportunity to do what she loves.

The wife and mother of one currently sees to the running of the school that looks after 38 children aged between three months to five years of age, and to date, Baptiste said that she is so happy that she listened to the sound advice, encouraging her to make the big move, as now she gets to work with little people who make her day and brings light and laughter to her life everyday.

It is for this reason, she said, that she will go above and beyond for them all.

The VOICE: How did you become the head of the daycare centre?

Baptiste: When I started living at the Morne, I was working as a Supervisor at a factory called Brook House Sportswear. After that factory closed down, I started sewing but whilst sewing, I realised that this was not what I wanted to do, so my Sister-in-law who was working with the Early Childhood Centre, introduced me to daycare. I must say that she is a very nice lady. She told me that there was a centre opening at Entrepot, so I went in, she brought me the form and I signed it. I started working there as a cook, but whilst working there, I kept on telling myself that I have so much more potential and that I should try going a little further. That’s when I decided to do an online course with Penn Foster and I passed all my exams and got my certificate to work in childcare. I was still working as a cook when I was done, but during that time, my Supervisor fell ill for a few months. I used to watch her closely, you know, how she would go about doing the books and different things, so when she was ill, there was no one who could fill in her shoes, so I decided to step in.

My Supervisor told me that I could hold on for the Supervisor who had fallen ill with a slipped disc. So I held on for her for almost a year, and when she eventually came back, I would still help her with the job. During that time, there was a Supervisor who went on retirement and I was called and offered to step in to fill her shoes. I thought of it for a while and eventually said no, but the Director at the Early Childhood Centre asked me would I say no without even giving it a proper thought?! I took some time to think about it again and I declined yet again. I told her: “I don’t think I want to do it!” but she was insistent and told me to take more time to think about it and call her before the school day ends at 4:30 p.m. I told her ok, I will speak to my family about it and hear what they think. I called my only child, my daughter who is a teacher herself, and my husband and we discussed it. They both told me that I should go for it, and my husband even told me: “Sometimes God opens up doors for us, but then we close them, so I think you should accept it.” After that, I called the Director and told her that my family advised me to take the job and so I will take it. To be honest with you, I was fearful because seeing that I would be leaving Entrepot after 10 years where I was very comfortable, and being sent to Ciceron…and I’ve heard a lot about Ciceron, that’s why I was so fearful. That night was sleepless. I was thinking of what could happen to me…I was afraid, but then I prayed and prayed, and I remember my mother telling me that God would bless me and that she would be praying for me too, so nothing would happen to me. So that’s how I ended up as the Administrator of the Ciceron Daycare Centre.

The VOICE: What are your tasks at the Daycare Centre?

Baptiste: As Administrator, I deal with all the books and see that the centre is kept up to date, but I also teach the children. So not only am I the Administrator, I am also a teacher. I try my utmost to help the children so this is why I go out and ask for donations for them and do things like I take them out on field trips to make them happy and comfortable. I try to maintain a happy and friendly relationship with the [parents as well because I’m the kind of person who likes to make people laugh. I enjoy working with the children…some of them call me “Mama”, “Teacher” or “Aunty”, and I am so happy. They always put a smile on my face

The VOICE: What is a typical day like at the Centre?

Baptiste: The day is fun filled always. I like working with the children where I teach them crafts etc. It’s always lively and fun filled.

The VOICE: Now there is also the hard part where you look after less fortunate children. How does it make you feel when working with said children?

Baptiste: To be honest, it is heartbreaking because there are those who come in and they don’t have anything to eat…but then again, I always have stuff in my bag for them. We teach the children about the importance of sharing too so sometimes, there are children with more than enough in their bags, they always share. The children are properly taken care of though, because we get government assistance that ensures that we cook for the children everyday. They provide us with the food items, we cook and the children always get fresh food to eat…no child leaves the centre hungry

The VOICE: What does it take to look after 38 tiny tots?

Baptiste: It takes a lot of patience, and so, if you are not a patient person, then this is not the job for you. you have to be patient because we get children from different households and not one family. You get children who are properly trained, you get some who do what they want, but just because a child does whatever they want, that does not mean that they should be beaten, you must always talk to them and educate them so that they can understand that they are growing up and should behave themselves properly. This is the way we operate.