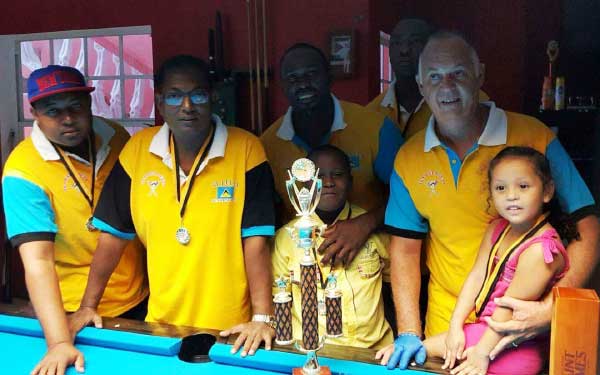 SAINT LUCIA Pool’s players continue their winning streak this past weekend when they defeated a Martiniquan team 6 – 1 to claim their second victory against the visitors as the interim Saint Lucia Pool Association held its last event for 2016.

The event took place at Nigel Eudoxie’s residence in Vieux Fort the follow-up event to the Kweyol Cup which was hosted in Martinique earlier this year.

The two day tournament featured some of the leading players from the French Island but they could not overcome the likes of Nigel Eudoxie (captain), Chris Bellas, Robert Emanus, Dwain Edward and Gilroy Pultie all playing their Ace Game.

Despite the 6 – 1 margin of defeat, the competition was extremely tense, with many nail-biting sets. It took place in an atmosphere of friendly rivalry.

When the dust was settled, the Martinique team thanked the hosts for the high level of hospitality that was extended to them throughout.

Meanwhile, the interim Saint Lucia Pool Association says it is pleased that its goal to generate a greater interest in the game is beginning to bear fruit. Pool players across the island can look forward to a full calendar of events from the ISLPA in 2017. Also a ranking system will be in place to select players to represent Saint Lucia in future tournaments both locally and regionally.