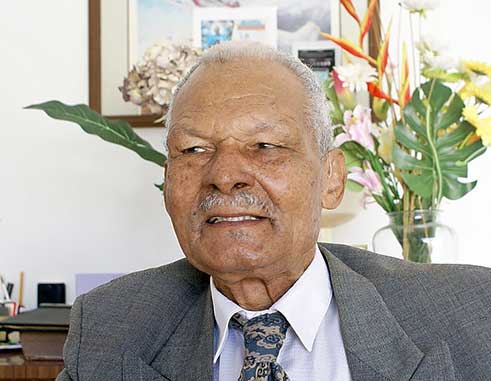 A truly outstanding Caribbean personality passed away last Friday, but sadly, the majority of people in the region might not have heard of him, far less be aware of his claim to fame. In fact, so little was said at the time of his death that had it not been for the words of tribute from OECS Director General Didacus Jules, his passing might have gone largely unnoticed.

Ronald Webster had two stints totaling less than five years as Chief Minister of Anguilla, one of the smallest territories in the Eastern Caribbean with an area of just 35 square miles and a then population of under 10,000. But Webster was the best known Anguillan leader period. In 1967 he and Anguilla commanded international attention with a campaign for “independence” that attained “revolutionary” status. In the face of what he termed neglect of Anguilla by the government of the tri-state federation of St Kitts-Nevis-Anguilla led by Premier Robert Bradshaw, Webster decided to secede from the union which had obtained associated statehood from Britain. Anguilla would go it alone. The Anguilla revolution was born.

When Bradshaw dispatched policemen from Basseterre to Anguilla to bring the Anguillans to heel they were forced to flee for their lives. Anguillans later made it clear with an overwhelming referendum vote that they wanted no part of Bradshaw. Britain sent an advisor to Anguilla to establish “administrative authority” but when negotiations with Bradshaw failed the advisor left. Anguillans reinforced their resolve in a second referendum to stay out of the federation and become an independent republic. In 1971 Anguilla formally broke away from the federation.

Throughout all this, Webster and the people of Anguilla remained resolute in their struggle so much so that when the British sent another emissary to try to negotiate a settlement, he too was sent packing. It took the arrival of some 300 British soldiers to restore order. Nine years later Anguilla was allowed to secede from the federation, to become a separate British dependency, which it remains today. In 1983, St Kitts gained its independence along with Nevis.

What made Webster stand out was his charisma, visionary leadership and the tremendous determination and resolve which he exercised throughout the bloodless struggle in standing up to both Bradshaw and the British government in a way no one in the region had done before or since. Our own Sir John Compton had lashed out verbally against the British to their faces at the time of the island’s constitutional conferences for Associated Statehood and later independence but Webster was able to get an entire island behind him in the stubborn pursuit of a cause that they had deemed just. Such is the esteem in which he is held by his countrymen that since 2010, Webster’s birthday on March 2 is celebrated as public holiday in Anguilla. In addition, he is accepted as “The father of the nation”.

To Anguillans, Webster remains a political cult hero who mobilized the energies of his people in the selfless pursuit of the advancement of his little island. He was the last of the breed of Caribbean politicians who put service above self and did it without seeking reward, a far cry from what obtains in the arena today.

Next year marks the 50th. anniversary of the Anguilla revolution. Webster will not be there in person for this milestone but his spirit is sure to preside over the activities being planned to commemorate this very telling event in the life of the little island. Ironically, a recent Constitutional and Electoral Reform Committee set up by the Anguilla Government, while recommending a series of changes in the governance of the island, concluded that Anguillans were happy with their present status with Britain and were not interested in independence at this time.