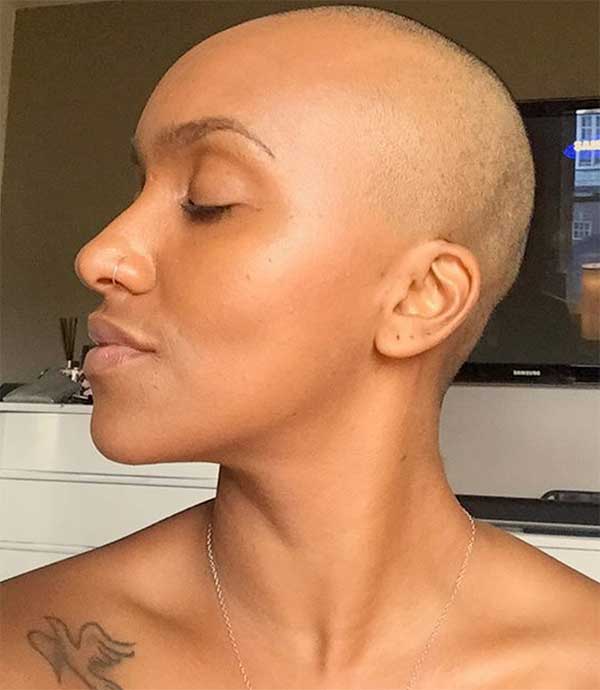 ONE of my favourite singers of all time, India Arie sang a hit song titled “I Am Not My Hair” in 2006, and although the song has much deeper meaning than the obvious message in the title, it is still a song that I sing to myself every time I look in the mirror at my hair and wonder what style I’m going to wear on that day.

Of late, I’ve been coming into my own more than ever, especially after making a bold decision to chop off all my hair to return it to its natural state…best decision ever!

This decision however, is becoming more popular by the day as black women the world over are joining in on the trend.

This week, I spoke to 28 year old Lillie Anatole who, just like I did, took the plunge…only, her plunge dove deeper than I did as she went the whole nine yards and got a complete buzz cut (also known as a skin head)

Now, Anatole is well known for being a comedienne and generally a big child at heart, and whilst she is also humble and extremely friendly and down to earth, she is equally as adventurous, brave and spontaneous. But with all that said, no one saw this move coming by a long shot.

As it turns out, Anatole’s story and reasoning behind the big chop echoes the stories of thousands of black women everywhere, and today, she wants to show that the plunge is not as scary as it might seem, but is in fact liberating and…well, healthier.

The VOICE: You recently joined the new trend of chopping off all your long and beautiful hair to sport a buzz cut. What inspired that decision?

Anatole: My hair was damaged from relaxer and heat and somewhat over processed because at the time I only wanted a straight look. Personally this was the best decision because I knew my hair would grow back full and healthy as opposed to going natural and leaving the remaining relaxer at the ends. It would have definitely pushed me to relax again, because Lillie has no patience.

The VOICE:They say that a woman’s beauty is her hair. What do you say to that statement?

Anatole: I disagree! Your hair shouldn’t define who you are as a person. Am I not ME when I decide to wear a different pair of shoes everyday? Hair grows back no matter what, unless there are issues like alopecia, it’s totally fine to switch it up from time to time, whether it is colour, cut, extensions etc. Life is so short for people to focus their time and energy on unimportant things like hair.

The VOICE: You have never been shy about experimenting with different hairstyles, but this is the shortest you’ve ever gone. Did you have any worries before making the big chop?

Anatole: Oh of course I did! I did some research before the buzz cut, I knew it was going to be a BOLD look and like you said I’ve never went that short before. A few of my friends suggested “go for it you have a great frame face for the look”. Then I said; “Ah to heck with it, one life to live…if it doesn’t look good there are always head wraps and hats!” So at that point I didn’t care because the goal was to go natural.

The VOICE: How did you feel during and after the process?

Anatole: The day I woke up I said to myself I’m getting this done today! So I proceeded to get my boyfriend’s clippers, went to the bathroom and just “koupesa!” I couldn’t believe I did it though… it was very strange looking at myself in the mirror after the process but it also felt amazing because this new journey was about to begin. I’d be lying if I said I didn’t get a lot of stares, but I embraced it whether people thought I was crazy or not; however, I did get a lot of compliments on the Buzz Cut. I would also have strangers ask me why I did it, and then I’d explain myself. I kind of miss the Buzz Cut though, it was very edgy which I like…maybe in the later years to come I might consider doing it again.

The VOICE: You have what is usually called “good hair” by black people which basically means that your hair texture is softer and curlier as it is mixed as opposed to the coarser texture. With such a large variety of hairstyles to choose from, why chop it all off?

Anatole: Well as I said before it was due to heat damage and relaxer that I had to cut it, I felt like there was no saving the relaxed hair so might as well have a fresh start. Growing up before I had any chemical in my hair it was natural and I always got compliments but never embraced my natural curls, and honestly, I thought my hair was like every other natural person out there. I never knew there was “Dougla”, “course” and so on, I hear people say that I have “good hair”, but isn’t all natural hair good hair? It just depends on how you take care of it, the products that you use and how often you wash it. Embrace your natural hair, no matter its texture.. I also want to put out there that I have nothing against the chemicals. It was just a personal decision that would better fit my lifestyle. I might consider relaxing in the future, but not anytime soon… now is the time to experiment with my curls, maybe add some colour and get funky with it.

The VOICE: What was the response of those nearest and dearest to you?

Anatole: For one, my mom wasn’t pleased. It was definitely a shocker. Her words exactly when she saw me “Oh my God”! However, my mom is usually my toughest critic. My boyfriend loved it and so did a few friends, but it was something everyone had to get used to. What was really funny, was after a month or two, my mom was feeling it and said that I should model with this look.

The VOICE: Unfortunately, we live in a time where people, especially men turn up their noses when they see women with haircuts like yours. What would you say to these individuals?

Anatole: Get over it! This is a new era and we are not in the 1800’s anymore. When a woman decides to switch up her look she’s doing it for herself and it needs not be to please her man. There’s just something about getting a new look that embraces us women and it just feels so good. In this day and age who wants to have the same old look forever? Not me, nothing is wrong with experimenting with your hai;r people need to understand it’s just hair. It’ll grow back.

The VOICE: There is seemingly an awakening of black women everywhere who are starting to appreciate the beauty of natural black hair, and so many women are going the same route that you did. With that said, many women are scared or even sceptical of taking such a drastic plunge. What would you do to convince them that all will be fine?

Anatole: One life to live if I can do it, so can you! Hair grows back and there are so many alternatives you can do if you are a bit insecure about rocking a short look. This has changed my life and I don’t regret doing it for even a second.