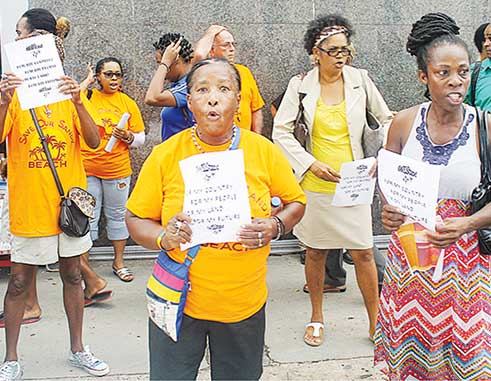 Having listened to Father Kevin Murray and Mrs. C. Wiltshire on television some evenings ago, I was taken aback by their views on the Desert Star Holdings development. Both individuals are undoubtedly persons of interest but listening to them, one got the distinct feeling that they became part of a pressure group orchestrated by a discredited politician whose intention is to cast a shadow over a project which can only stimulate employment and improve the daily lives of hundreds of persons who live below the poverty line. I may be wrong, but that’s my impression.

Father Kevin Murray in particular should recognise and realise the dire straits of persons in the south based on his religious calling. On the other hand, he questions an investment which can only address the suffering folks of the south. Does his religious concerns and compassion extend beyond the walls of his church? We certainly would like to know.

Father Murray happens to be a U.S. citizen from Philadelphia who has resided in the south for the past five years and has apparently aligned himself with a political party for reasons to be disclosed in due course. We should, however, be grateful if Father Murray can confirm or deny whether he was part and parcel of the group who supplied the yellow T-shirts worn by the demonstrators.

Ms. Wiltshire is of Guyanese origin. Some say she has occupied an area of land at Sandy Beach for quite some time.

On a final bit of advice for Father Murray, he needs to decide whether he wishes to alter his profession from that of the clergy to politics and if so he may start considering whether the timing is appropriate to renounce his U.S passport and apply for St. Lucian citizenship to conform to the regulations of the land pertaining to political requirements. This information will be communicated to the Archbishop as it is only fair that church be kept abreast with the decision of its flock.