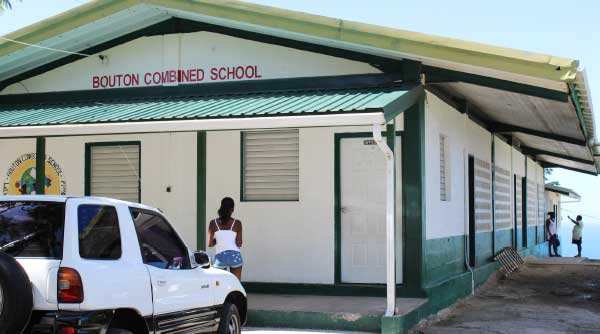 SIX miles from the town of Soufriere is a small community that at one time was the butt of several jokes in the country on account of the lack of attention given it by government.

Unknown to many who laughed at the jokes was that this community, Bouton, was home to some of the most glorious scenery this country could produce.

Despite the several modern and technological strides Bouton has made today, many still view it as a place that is “behind-God’s-back.”

Once a thriving farming community with several hundreds of residents, Bouton today boasts just about 150 souls.

Sponsored | Article continues below
“A lot of people have moved away, some to look for work as things are slow here, others for whatever reason but they always come back to visit their families and friends in the community whenever Christmas comes around,” says Marcus Ford, a father of four who has lived all his life in the community and occupies a very large portion of land inherited from his mother from which he earns a living farming.

A fire in April of last year completely destroyed his single floor wooden structure. He has rebuilt but the structure is only partially completed. He is asking for public assistance to complete his home.

One of the elders of the place, a lady who goes by the name of Ms. Lucille -said to be her “community name”,- also admits that the need for employment other than farming is the main reason why so many of Bouton residents now live outside the community.

“But at Christmas time they all come back to visit their families,” she said.

“When I was raised in Bouton there were only dirt tracks as roads in the community. This single paved road that leads to the school was not in existence. People were loving towards each other. It was a wonderful place to live,” Lucille said.

“It was Bousquet, old Bousquet (the late JMD Bousquet) who was the first politician to start asking things for Bouton. It was through him that this single road which goes through Bouton and ends at the primary school was built. Well not really built, but started,” Lucille said.

She added that the road was lengthened bit by bit over the years until it stopped at the school. Other amenities took some time to make their way to Bouton. For instance Lucille said that prior to the introduction of electricity in 2000 generators were the source of energy in the community.

Water, or the lack thereof was a problem over the years. Today, despite a storage facility in the area by the Water and Sewerage Company, water is still a problem for residents to the point where last Saturday they met with government representatives to discuss ways in which they could harvest water. As usual the meeting took place at the school, the only public building in the community.

The community has no shops, roads, or village-like atmosphere, just this one single road that leads from the Soufriere highway all the way to the Bouton Combined School. There is no other paved road in sight. Homes are on either side of the road and behind the school well sheltered by foliage, dream homes for lovers of nature.

It is a community that is not for sale as families hold on to their property passing it down from generation to generation.

Strictly a farming community known for producing sweet potatoes, manioc to make farine and pineapples, the place is also blessed with tamarind, sugar apple and other fruit trees.

The Catholic Church controls a sizeable portion of land in Bouton which some residents say was bequeathed to the people of their community by its former owner, Charles Hippolyte Boucher via his will.

Residents are saying that the lands under the control of the Church was intended for the use of the poorest people living there. Those lands were to be given to the people.

A handful of residents from Bouton have called on the Church to return the lands to the people. This is yet to happen.

This seems to be the only ripple disturbing the otherwise peaceful and tranquil nature of the Bouton community. The school is the place where activities are held. It was established on 17th June, 1961 through the efforts of the Church, a wooden structure just 24 feet by 52 feet. This original structure was completely destroyed by Hurricane Allen in 1980 and rebuilt in 1982 by the Hurricane Allen Saint Lucia Rebuilding Fund established by Leon Hess. The school is made up of students coming from the communities of Belvedere, Soufriere and Bouton.

The community could no longer be called behind-God’s-back. It now has all the modern features now taken for granted in all Saint Lucia, including wi-fi which is open for all and sundry to use. And the views of the Caribbean Sea and the Pitons are breath-taking.