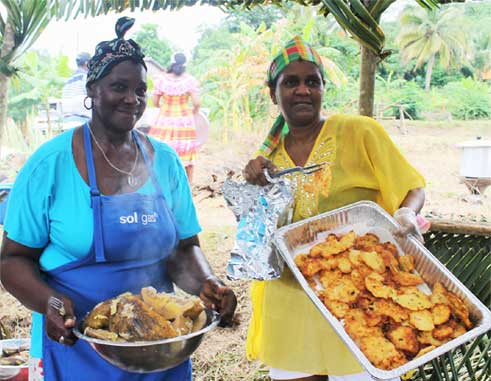 I get the feeling that after this piece, I will lose quite a few readers because people might think that I’ve lost my mind and that I’m disrespectful, but hey, it’s my opinion and it’s just another one of those things that costs a dime a dozen.

With that said, ROLL ON OCTOBER 31!

This is by far my worst time of year and the one thing I look forward to the most, is the day after, when all is said and done.

There are numerous reasons why I just can’t find myself getting fussy over this Snooze Fest but before I continue, let me just say that, hey, I’m not knocking anyone’s hype…if that’s your day then by all means, do your ting!

Firstly, the food; I actually hate the majority of it and with the exception of bakes, cocoa tea (and even that is only consumed once in a while because I hate the idea and the act of drinking milk…YUCK!), seafood (Crayfish, Crab, Lambi and Bwego) and sweet cassava bread.

I’m sorry but I’m not sorry for hating stinky saltfish and smoked herring that’s filled with bones and God knows what else. Then there’s the Dolphin… actual Dolphin, Turtle, Rabbit and all other exotic meats consumed…Yeah, I’m a bleeding heart for the cute and cuddly animals (except for chicken and turkey), I will not touch these meats even though you paid me.

Then there’s the fact that as a fruit lover, the only fruit I can find all over the place is Avocado, Paw Paw and Soursop (gag).

Going back to the meats, I don’t eat any form of red meat, so in other words, no animal that walks on four legs/no mammals (to you cheeky minds), so the sight of slaughtered pigs, goats, cows, sheep and all else leaves me feeling like I’m in a bad horror film.

And finally for me, all the oily foods like Accra…can someone say “Heart attack in foil?”

Ok, so now that I’ve vented on my petty dislikes, let me get to the real reason why I don’t like this time of year…it has lost its authenticity!

Like all other national events, this one has just become another washed out tradition turned business where the majority of people who spend big bucks to look the part, have no idea about what they are actually celebrating, and they really don’t even care to know.

It’s all about the lime and fete as well as a beating of the chest ritual over who looks best.

I have gone past the low tolerance for this kind of folly and have hopped straight on to having a downright allergy for it…it makes me sick to the core.

Now mind you, I’m not sitting on a high horse with my wealth of knowledge surrounding this cultural event because I am certainly no Hilary La Force, Robert Lee, Kennedy “Boots” Samuel or Margot Thomas who are sitting on the holy grail of St. Lucian history.

But at the same time, the few times that I do venture out on that special day, I do so with fascination and a hunger to learn even more about our culture.

I don’t go out there to see who is wearing what and who is walking with whom, and which fete is liveliest…no, that is so unimportant to me.

I just don’t know….people just have no respect for culture and tradition anymore.

Oh yeah and whilst we’re talking about watering down, what on earth has happened to the music? Since when did good ole Kweyol music turn to smut in patois?

Have you heard some of the songs out there being played on our airways? The demeaning and graphic content that people gleefully wine their waists to and follow all the instructions…what is going on? Poor Sesenne Descartes is probably turning in her grave right now.

Now I know all these people have the right to do as they please and they surely will, and although I know this will not affect anyone, I will happily choose to stay away from it all and look forward to the next day.

But with that said, I am heartbroken to see the way that St. Lucians have just joined the rest of the western ideologies and have purposely forgotten and even ignored our culture…it’s a shame!