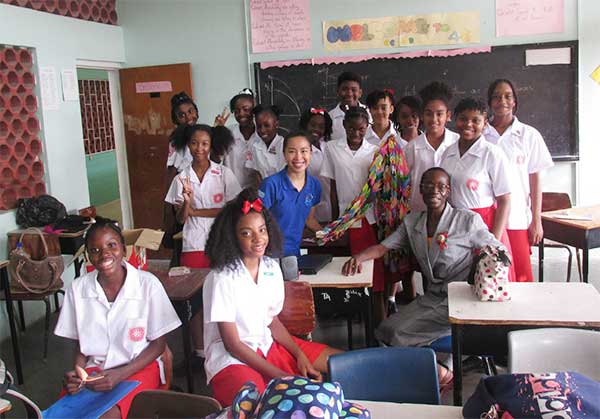 ONE Youth Field Officer who came to the island two years ago with the Japan International Corporation Agency (JICA) has opened up the gateway for lifelong friendships between teenagers living on complete opposite sides of the globe.

Imoto felt the need to highlight this activity and the achievements of the participants as her tenure has come to an end, so has the project. She is due to head back to Japan this week.

There were three purposes to the project which were;
1. To provide opportunities for St. Lucian and Japanese Youth
2. To make friends who live different cultures
3. To deepen the students interest in cross culture exchange (CCE) through their friends living on the other side of the globe.

Imoto said she believed wholly in the project and is confident that it was a massive success.

The project, she said, gave the students a clearer understanding of the different backgrounds of the two countries and an insight into each others race, climate, language, food and lifestyles

Imoto said: “As time passed for me in St. Lucia, I realised that St. Lucian youth, who live on a small island, may not have many opportunities of cross culture communication, and at the same time, I remembered that Japanese youth living in the country side of Japan also don’t have these same opportunities, me included. When I was younger, from junior high school to university, communication with the same aged oversees student gave me motivation to see more of the world. So through the project, I wanted the youth in both countries to deepen their interests in CCE with the same generation who lives on the opposite side of the globe.”

Throughout the project, the students in both countries were made to work with three tools of communication…letter exchange, then video messaging and finally, craft collaboration.

Students made their own profile sheets with their photographs and contact details included to introduce themselves, and so began the communication process.

The 29 year old Youth Field Officer said she specifically used letter exchange at the beginning of the project because it felt more genuine, personal and thought out as opposed to sending quick and easy emails. Also, it gave the students a sense of distance, as the letters took two months to be fully exchanged, showing the students just how far apart in the world their new friends lived.

For the craft collaboration segment of the project, students were tasked with creating 1000 paper cranes among themselves. This is a popular Japanese paper folding craft called Origami….The students of the SJC alone created 480 cranes.

Imoto explained that paper cranes were specifically used as this is a Japanese symbol of peace. She said: “As a new activity in the correspondence project, I wanted to introduce Peace Education to them. last year was the 70th anniversary since World War II ended in 1945 in Japan, so making use of the year’s anniversary celebrations, I wanted to make a good opportunity for students of St. Lucia and Japan to think of peace. In addition, I wanted the students to make something together, so 1000 folded paper cranes on a string as a symbol of peace was perfect for the collaboration together.”

Each crane includes messages of peace scribbled on and will be taken to the Children’s Peace Monument in Hiroshima Peace Memorial Park in Japan. The two Japanese schools chosen are situated close to the park, and on their upcoming school trips to visit the site, they will hang the cranes of their St. Lucian counterparts on the monument.

With the exchange of contact information and the vested interest shown by the local teachers, Imoto said she is hoping that the relationships continue to blossom over a lifetime, and that the project can be continued and passed on to the younger generations.

She said: “I would love to see a future meeting with the Japanese and St. Lucian students who communicated through my programme. I want to see real communication because such a moment would be a dream come true. It would mean that in the end, my project was a success.”