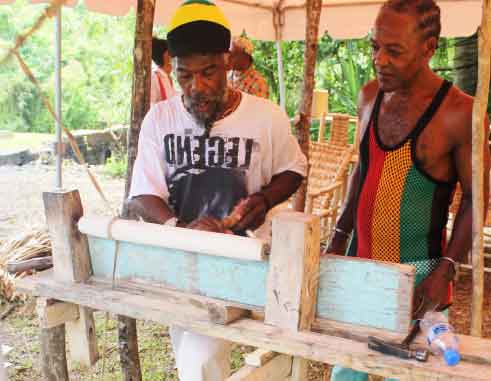 ASIDE from inherent duty to celebrate the island’s cultural traditions, Gros Islet and Choiseul are stressing heavily on the sectors that set them apart from many other Saint Lucian communities as they host Jounen Kyéyòl this Sunday.

Gros Islet’s main focus will be on its fishing past and have adopted the theme, “Pweson, Pweson…A Fishing Tale”.

Public Relations Officer, Gros Islet Development Committee, Minerva Bicette, says preparations have been heading in the right direction so far. She added that the committee wanted to host some more franchise activities prior to Sunday but due to costing and limited sponsorship it was unable to meet those objectives.

On Wednesday, however, the committee hosted its Theatre Night featuring a group of young dancers who had been receiving coaching sessions in dance and drama from popular dancer/actor Richard Ambrose for the past few weeks. The session featured students from the Corinth Secondary School Theatre Arts class.

Gros Islet Town has not hosted JounenKweyol for over a decade now despite other communities such as Monchy and Grande Riviere – which form part of the constituency – hosting the event in recent times. Bicette is encouraging parents to dress their children in madras outfits as prizes will be awarded to those who are best dressed.

Neil Verdant, also a member of the committee, said patrons are in for a special treat this weekend, beginning with the regular Friday Night street jam being transformed into a creole-themed precursor to Sunday’s main event.

Jounen Kwéyòl activities begin from around 4:00 a.m. on Sunday with a church service at the St. Joseph the Worker Church scheduled for 9:00 a.m. As soon as the service ends, the entertainment begins.

“Patrons can expect a lot of the traditional things such as vintage items that will be on display on Sunday,” Verdant said. “We’re also going to have re-enactments of some of the favourite Saint Lucian pastimes such as the carrying of the dead, and sawing of wood. However, what I think will interest most people is the entertainment that will feature the likes of Mighty and Subance, and the Secret Band.”

Schoolchildren from schools within the constituency will also be making cultural presentations on Sunday. A “gwanmouvman” parade will add to the festivities in an effort to create a true JounenKweyol ambience and prizes will be awarded for the best decorated booth and house, Verdant said.

“We’re encouraging everyone to end the night in Gros Islet because we have a lot of things in store for them, including special prizes,” Verdant emphasized.

Verdant said Gros Islet is a special community as far as our culture is concerned. He said a number of prominent people in society, including creole-speaking radio personalities such as Sam “Jook Bois” Flood, Lawrence Adonis and Marcellus “Man” Miller, all call Gros Islet home.

Expect to see stalls set up on Dauphin Street, Bay Street (where the town’s fishing tradition will be highlighted) and Church Street, to name a few, as Gros Islet rolls out the cultural carpet to welcome you. Verdant said the best of Saint Lucian culture will find itself in Gros Islet’s JounenKwéyòl.

“Gros Islet is a fishing village but also a melting pot of the other Saint Lucian communities because many people are forced to live in our constituency where they have jobs in the hotel sector. So through that, you’d find that people from other communities add to our community culturally,” Verdant explained.

Meanwhile, Chairperson of the Choiseul JounenKwéyòl Planning Committee, Theophila Charles, says that the constituency’s renowned “arts and craft” industry will be the highlight. Beautiful items such as coal pots, baskets, folders, hats and chairs from Delcer, La Pointe, Mongouge, Victoria, Debreuile, Cafeiere and the other communities within the constituency will be on display.

The main activity on Sunday will be held on the La Fargue playing field where dance, poetry, drama and other cultural activities will be show-cased by a number of groups. Last Sunday, the west coast community hosted its LawennKweyol Pageant which was won by LuceleenModeste.

Yesterday, a food and drink festival was held in the community. Activities continue today with some of the artisans teaching youngsters their craft.

“With Choiseul hosting JounenKwéyòl this year, we are hoping that the spotlight is put once again on our arts and craft industry which really needs some marketing,” Charles said.