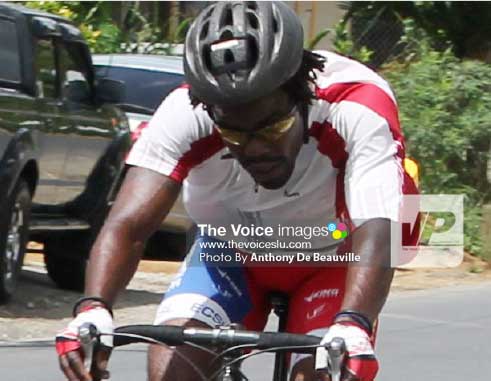 With all eyes on the road champion, it was steady riding for the first five laps until a group of four riders including juvenile Kluivert Mitchel, along with Andrew Norbert and Winston Williams, got away to form a breakaway. This group stayed together until the 15km mark when Mitchel was unable to hold on, leaving only three riders in the lead.

By the 20km mark, Jn. Baptiste made an attack and went on a break on his own, leaving Norbert and Williams in pursuit as the two continued to work together in an effort to bridge the gap.

Meanwhile, a small bunch comprising Dornal Joseph, Joel Mentor, Jessie Mentor, Josiah Murrell and Sherkel Aubert was further back on the circuit. Jn. Baptiste in the lead would not let up despite Norbert and Williams chasing. Further back, Aubert and Murrell were off the back of the third group and Jessie Mentor was out of the race whilst Jn. Baptiste slowly started increasing his lead.

With about 20 laps to go Jn. Baptiste lapped the third group (1.3km ahead) and was in pursuit of lapping the second group comprising Norbert and Williams. With just 12 laps to go, the experienced Williams bolted away from Norbert in pursuit of Jn Baptiste. But Jn. Baptiste upped the tempo, lapping everyone in the race with Williams being the last to get lapped with just under two laps to go.