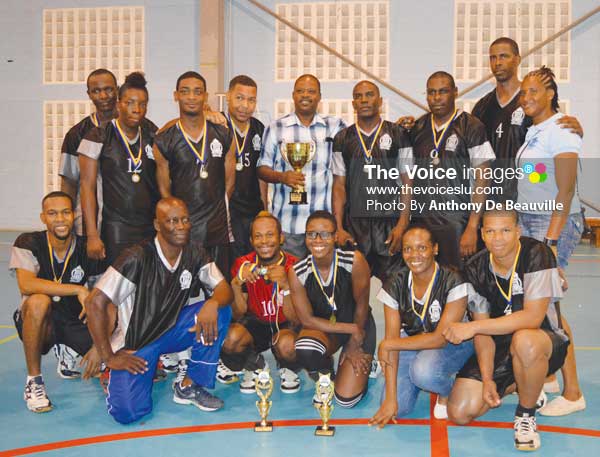 THE stage was set on Friday at the Beausejour Indoor Facility for the conclusion of what has been a both an exciting and low-key 2016 Commercial Volleyball Tournament.

Four teams were supposed to square off for three placements.

A vibrant WASCO went up against three times defending champions Police for the championship, while Massy Stores were left high and dry as FLOW was a no-show for their encounter for the third place silver ware.

Spectators came in early for what was anticipated to be the most exciting matches of the tournament.

With an estimated 100 supporters, WASCO and Police took centre court as the crowd roared in support of their respective teams.

Police started as favourites and they quickly put away the first set 25 – 13 led by national player Dayne Williams with thunderous attacks and Signa President as setter with some on target sets.

Police went on to claim the second set in similar fashion with some smart play from Captain Daryl Evans, Libero Jerome Girard and Lance John, despite efforts by WASCO.

At that point it seemed obvious that WASCO came prepared to stop and funnel the hard hitting spikes of Police’s Dayne Williams and Daryl Evans. But it was a bit difficult for them to adjust to Police’s intimidating defensive strategies as two of WASCO’s key players not showing up for the showpiece and from having one extra player on the bench.

With the humidity at an all-time high, the fourth set saw the two fatigued teams dig deep and really give their all. The points see-sawed a few times and so, too, the enthusiastic crowd clinging at the edge of their seats hoping that WASCO would go on to level the match 2 – 2 or Police winning 3 – 0. In the end, Police dug into their reserves to make a final run to win 25 – 16. They won the set, match and the championship trophy for the fourth consecutive time.