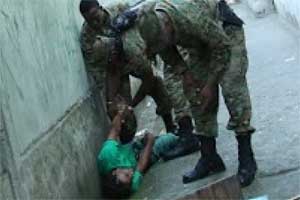 IT’S easy to criticize and most fools do. Preparing the most captivating documentary and forgetting to add 48 seconds of audio in a critical interview can spell disaster for a producer, simply because no one wants to hear your mouthful of excuses of who, what, why, where and how the problem occurred. You were to blame, take it, fix the problem and shut up.

A gazetted officer described my last scribbles “Bands, Blood and Blame” as a scathing attack on the Royal St Lucia Police Force. A pair of officers who were photographed, accosted me shortly after 6:00 p.m. on the Conway Waterfront. While one officer removed the safety, the other took a fire extinguisher to my conscience and for my elucidation they planted their version (sorry their correct version) of the j’ouvert mayhem for a sense of balance.

As the carnival parade wound down the gentlemen reminded me of the selfless act which occurred that morning to save the life of a young woman who was stabbed in the heart with a broken bottle. They arrested my left ear, relating how fast thinking officers performed CPR, placed the victim in a police vehicle and rushed her to the Victoria Hospital. As they chastised me for not reporting on those courageous deeds, I was slowly, reluctantly and pleasantly coming around to seeing their side. But before the conversation could climax, Lucian revellers were at it again.

The thick crowd near JJ’s bar, parted like a snake was on the loose, at this time of year it only meant one thing……..fight! Instinctively the two men dressed in full camouflage sprinted to the scene. My Canon 5D Mark III sprung to life in similar fashion and all my journalistic tentacles became aroused. I dashed through the alley following the officers my finger on the trigger of the camera. By this time three other officers are involved in the chase, the suspect bolted behind some vendor’s huts, one police officer falls in the process, his colleagues pursue the suspect across the street and straight into the alley leading to the Conway ghetto. My little legs struggle and I lose sight of the officers and then………………….pow!

I arrived in the alley to catch the green flash from the firearm, my finger still on the trigger of my Canon. A suspect was lying in the gutter, guns were drawn and of course a massive crowd had swarmed the area. From nowhere voices started shouting, “Police brutality, why you’ll shoot de man, dem police too dirty.”

As the uncoordinated chorus amplified, one female approached the officers who now had the suspect in handcuffs and were dragging him out of the alley; she had a bottle in hand and was acting in an aggressive manner. Fortunately none of the officers were injured; unfortunately the loud mouth female was now in handcuffs and headed to her majesty’s custody suites.

That Canon 5D Mark III is an absolute gem. It allowed me to capture in real time the work of the men of the RSLPF. How fearlessly and unselfishly they put their lives at risk for every one of us on a daily basis, at the drop of a dime. How they go above and beyond the call of duty and break protocol to save a life. How they can give gentle directions to a tourist in need, yet, can stare down machete wielding men in an effort to prevent bloodshed.

To serve and protect, if ever there was doubt, the 558 pictures which I took in less than two and a half minutes, tells the most amazing story of selfless bravery, proper training and the pursuit of protection of every citizen by nameless, faceless, members of the Royal St Lucia Police Force.

It’s easy to criticize and most fools do. This fool will instead, stand, salute and say thank you for the simple gestures of service and protection.