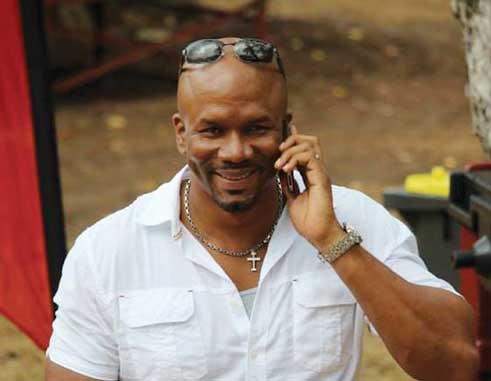 One of the objectives of this column was to tell the life stories of individuals from all walks of life. These people, you would normally spot in passing but you would either not give them a second look, or you might give them quite a few looks but form the wrong impression of them in your minds.

Well, today’s FITC most certainly stands out with his tall and muscular frame with the bald head and the serious face to add to the look.

One would definitely feel intimidated in his presence but my, oh my, would they be mistaken.

Canice Pierre is a 44 year old Tech Whiz who, after 25 years of working in the telecoms field and the corporate world, has decided to take some time to pursue one of his passions/skills that he said he never had enough time to concentrate on.

The “techy” is surprisingly very quiet and said that whilst people mistake that trait of his for being unapproachable and scary, in reality, this is just his way of constantly processing and thinking about his surroundings as well as his next move.

He also said that in the right forum, he is extremely witty and jovial as well as very human.

Pierre has moved up from a regular technician to hold quite a few prestigious positions including manager, vice president and head of departments in technology but still, he refers to that particular skill as a passionate hobby.

One of Pierre’s most recent and public bodies of work included the graphics seen on Choice Television on election day, June 6.

The station was lauded for providing the nation with up to the second updates, which surpassed other broadcasting stations whilst the results were being revealed.

Little did the vast majority know, Pierre was the brains behind it all.

The VOICE: To those who don’t know you, you appear to be a scary looking muscular guy but you are in fact a “techy”. Please explain your relationship with technology

Pierre: Well, more than half of my life was dedicated to technology so I guess eventually one of my hobbies would  fall into that realm. I saw it, technology, as a means of solving everyday problems. My former jobs exposed me to mobile, traditional telephony, fibre optics, satellite transmission, radio, power etc, and solving the problems related to these naturally led to me trying to solve other problems using technology and computers. I think also that during my childhood I was also influenced by television shows…Oh I loved TV. “Whiz Kids”  is one of those shows I remember which first sparked my interest in computers. I however never had any much interest in the hardware side of things. I became very intrigued by coding or programming but never pursued it.

The VOICE: At what point in your life did you realize that you were gifted in that department?

Pierre: In 1990, as part of the Job Training Programme offered to Sir Arthur Lewis Community College students in the Technical Division, I selected Cable & Wireless as the company I wanted to train at. While there I began playing around with a Windows 3.1 machine which wasn’t part of the operations. Lo and behold there was Microsoft Basic on there and in less than a week I went from “Say hello” to designing a functional income tax programme. It wasn’t very complicated but the techs who worked there used it to verify their submissions as at that time taxes were done by the public manually like some still do now. It was from there I got to realize that I actually loved being able to talk to computers and have them solve problems. After that in 1998 while doing my diploma in Operational Telecoms, during one of the modules, we were assigned a project which used Pascal programming language and assembly to have output displayed both on a screen and on a seven segment display (L.E.D display). I and a friend named Richard not only finished in one third of the time but went overboard and surpassed the Ms DOS layout to have our programme look like Windows 3.1.  We ended up assisting the remainder of the class with their project.

As fate would have it, when the course ended that same year, another friend, Roy, had discovered Borland Delphi which is object Pascal and that grabbed my interest…tightly.

Well, he had one of those thick “Teach yourself in 7 days” books which I read and by the following week I began writing functional programmes which were used as part of the operations at work from inventory software, to routine maintenance scheduling and to a favourite, StationLog, an electronic logbook.

The VOICE: How much of your life do you dedicate to technology and just how important is it to you?

Pierre: Like I mentioned before I was around technology for a very long time. As far as software writing, I didn’t do it often unless a problem came up that I wanted to help solve. When one did come up, it was complete dedication…sitting for hours at the computer ignoring sleep, food and other comforts or doing coding in your head whilst you walked or drove or waking in the middle of the night because you figured out a piece of code whilst you slept.

The VOICE: Would you consider yourself to be a “nerd”? And generally, what do you think of that term?

Pierre: Hmm, actually No I don’t think I am. I was called that during my school days because of my academic performance and wasn’t too fond of it.

The VOICE: What is the general reaction from individuals when they realize that you are not the “beast” that you appear to be and instead, you are this computer genius?

Pierre: I wouldn’t say I am a genius. I have had a few successful out of box moments. I find people are generally intrigued because not many people are versed in the software side and some believe that it is all very complicated and mysterious. Besides, I am still learning as I go along.

The VOICE: With all this “end of days” talk, hypothetically speaking, do you think you could live without technology?

Pierre: Yes, I can live without it. One reason being, I grew up in an age before computer proliferation and secondly, I hail from a rural community. Although I am attached to my cell phone, during End of Days it wouldn’t bother me as I would have other things to worry about.

The VOICE: What has been your greatest achievement as a “techy”?

Pierre:  I have had quite a few of these. My real satisfaction always came from solving a problem that seemed to be a doozy or unsolvable at first by others. So much so that one of my former bosses, Mr. Walcott, nicknamed me “Supertech”. To this day more than 15 years later he still shouts “Super” when we meet.

The VOICE: I can imagine that there are frustrations that come with the field, what are your biggest gripes?

Sometimes you have a bug that you just can’t find for no apparent reason, only for it to be staring you right in the face after a few hours of searching.

Oh and the “I will save just now” only to lose your work because of a PC crash or some other reason.

The VOICE: What does it take to be at your level in the world of computers and technology?

Pierre: Level? I am just starting to scratch the surface. I am now dedicating time to it and plan to learn a lot more.

The VOICE: Again, using my imagination, I’m guessing that this is a career path to choose; money wise, how lucrative is it to be in your field?

Pierre: My love for it came from intrigue and satisfaction of the Eureka moment. I am only now trying to grow it into a business. However generally speaking it can be very lucrative if you are good at it. One can earn $28 an hour on some jobs or charge let’s say anywhere around $40,000 for a good customized piece of software. If you are lucky you can become the next millionaire by creating the next “Instagram” or “Whatsapp”. It’s all about catching the eye of the right investor and coming up with a great product that people find themselves not being able to do without.

The VOICE: To the school child who might be getting teased by peers for being a “nerd”, “egghead”, etc. all because they have a love/gift for computers, what would you say to them to let them know that their passion is worth it if they keep at it?

Pierre: On the serious side, I would ask them never to give up or ignore a talent that seems to follow you around no matter how much you try to drop it. If you have a passion for it, develop your talent. It doesn’t feel like work when you love what you do. On the funny side, I would tell them that the nerds get all the chicks, cars and jets and hire the jocks.